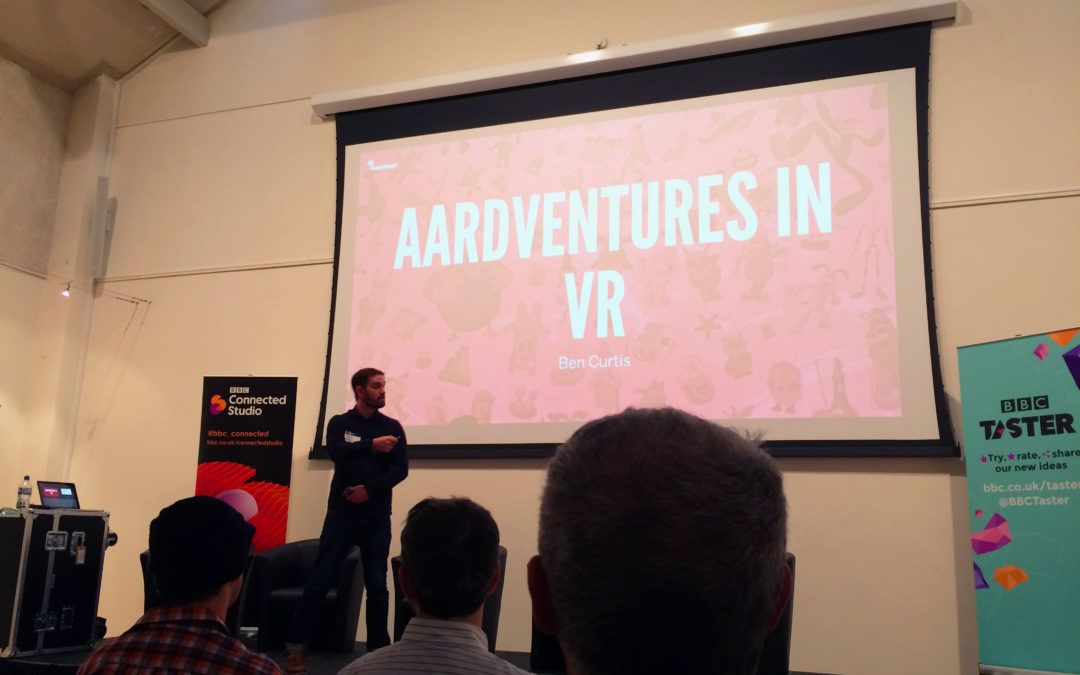 BBC Connected Studios held a VR Festival on 30th June to give content producers the chance to explore the work that BBC R&D has been carrying out across the organisation around virtual reality.

We were given the opportunity to try out the latest VR headsets with some of the pilots and projects that have just launched on their test website.

It was great to hear from experts in the field that it’s still an emerging technology with plenty of opportunities for innovation and it was genuinely encouraging to hear passion and enthusiasm for the technology from senior figures such as Zillah Watson and Will Saunders.

I took on a great deal from Ben Curtis (Aardman) talk about his work Producing ‘We Wait’ a fascinating VR experience about what happens to refugees once they leave their country.

It was interesting to learn that eye contact was initially one of the motivators for the emotional connections through the narrative but this diminished as the project went on. It sounded like he was still keen on exploring this interaction within the VR medium and it got me thinking about the possibilities on offer here. Especially as gaze mechanics evolve, enabling viewers to initiate actions as we look at them.

As he explained the development process one thing became clear, the traditional techniques that you would use to previsualise a film are out the window here. When you allow viewers to go where they want you are essentially throwing the Director’s viewfinder out. No more do you choose the viewer’s window on the story with thumbs and forefingers poised to offer a widescreen view. No more do you recce the set like a monocled Hitchcock, master of all he surveys. No, in the modern world of VR you use Lego.

Ben noted that the technology was shifting so fast that they had problems with having to re-light the whole piece as the tech shifted the capabilities of what they were trying to achieve. I imagine this will be a challenge for all VR and 360 degree filmmakers going forwards thus making it a dynamic, exciting and sometimes frustrating medium to work in.

Ben showed us a flow chart that they created to plan the interactions the characters are likely to have. It’s important that the narrative makes sense but the viewer needs autonomy to experience that narrative in their own way.

Sound design was a topic that every speaker touched upon. It seems that the We Wait team did a fantastic job of creating a layered soundscape that was dynamic and responsive enough to remain immersive whilst still being interactive.

In an interesting aside about what we might expect in the future for the technology Ben mentioned that the VR engines may become more powerful by rendering in high detail only what viewers are looking at, rather than the full 360 environment. And that eye tracking within the headset may become commonplace.

Katy Morrison @Katy_Morrison from Vrtov.com spoke of the unlimited possibilities on offer in VR. It was great to hear someone celebrating the fact that she is working in a constantly changing medium. Her VR piece The Turning Forest was an example of how new technology can be used to tell a traditional fairy tale. One major takeaway for me was how the concept art was used to create the feeling of a 2D experience within a 3D world. The illustrations were beautiful and made me ponder how wonderful it will be when VR is more openly accessible to children so we can adapt beautifully illustrated children’s literature into 3D VR experiences. The inception of The Turning Forest started with a piece of binaural audio and built a fairytale world around it. This strikes me as an extremely rewarding project to have worked on.

Katy made a fascinating point about working in VR documentaries when she said, ‘it can be better not to try to achieve a photorealistic look as you can concentrate on crafting a narrative that’s meaningful as an experience. You don’t need to worry about re-creating the real world.’

The festival was rounded off with a chance to try some of the latest VR devices. It was a fascinating look into an emerging medium which offers a new way for filmmakers to tell stories and I’m very grateful to BBC Connected Studios for the invite.