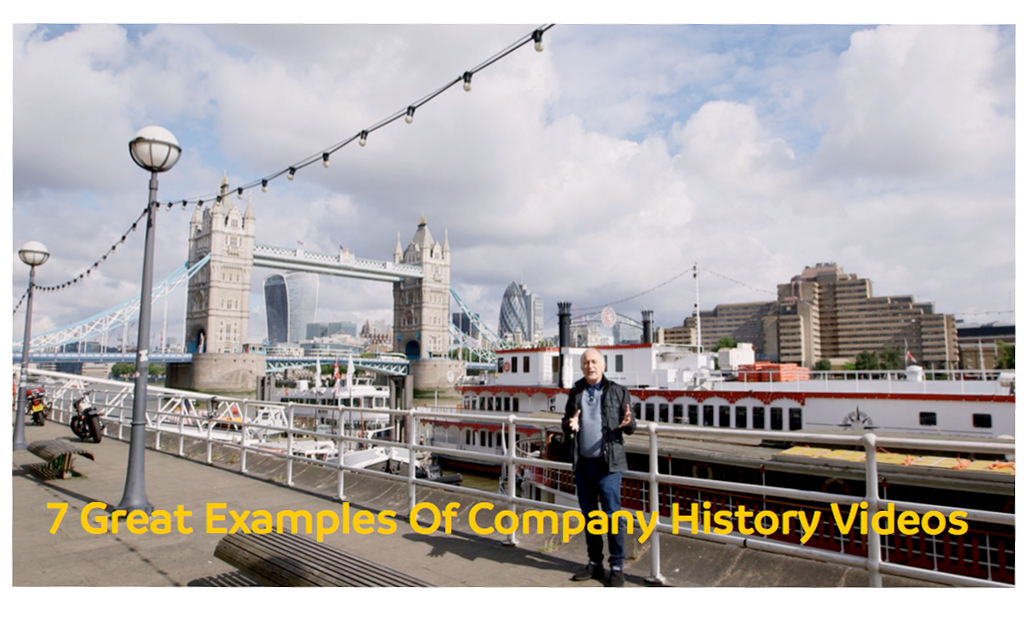 Behind each great company is an equally fascinating story of how the business came to be. Video is the perfect way of telling this tale. As the company history videos below demonstrate, there are numerous ways of explaining how a company was born and developed to where it is today. If your brand is looking to tell its story, here are some of the best examples of company history videos to get you inspired.

The style of this company history video is very much like a film trailer. The actors, cinematography, sets, and props are all equal to or better in quality than many feature films. The video tells the viewer, ‘we are a huge brand that can afford this’, but it also displays how historically important the brand is by placing it alongside key moments in history, such as war and the Shackleton arctic expedition.

The Burberry video looks gorgeous, which makes it an excellent representation of what they sell: beautiful clothes. This is a great example of knowing what to use to sell your brand, and investing money in the right places.

This is a fairly long-form corporate video compared to many others. It’s essentially a short film in its own right, that just happens to be about the conception of a brand. It is animated, which means it is in keeping with the brand, which is essentially for kids (although we all know a few adults who love it too!). The use of animation also helps the sadder parts of the video from being too heavy.

Even though the video is animated, there is a lot of thought that went into the production design and lighting, which help to push along the narrative. It also tells the story through a narrator who, we discover, is a descendant of the characters in the video. This helps give it an emotive family link, which is a way of instilling the brand with a wholesome feel that parents and children alike will buy into.

This video is portrayed a timeline format, showing the evolution of the Nike brand. It uses a popular film device of moving the images from right to left to represent progression and moving forward. Since Nike started back in 1964, the older video footage and photographs aren’t going to be perfect. The video utilises mixed media throughout the video, which makes it less jarring to the viewer when one encounters a lower quality photo.

One way in which Nike made the video more trustworthy is retaining some of the setbacks that the company encountered. By letting the viewer glimpse, but not dwell on, the negative moments, it gives a better rounded history than if it had just kept the company’s successes.

This videos features Levi Strauss’s historian to tell the story of the popular jean brand. The company is quick to align themselves with social change, included the anti-war movement and the fall of the Berlin Wall.

The filming is documentary in style. They use archive photographs and memorabilia to help demonstrate how the brand developed throughout history, from the 19th century to present. The goal of the video is to relate to the masses, and in particular, their target audience: the working class.

This is a video fully executed by motion graphics. It pulls together archive assets, mainly pictures of the designer Coco, her designs, and the people and places she knew in her life. It then manipulates the images in a creative way, so the story moves seamlessly from one graphic to the next without any hard cuts.

This editing style helps demonstrate how everything that happens is connected to create the Chanel brand we know today. The video also has a very well written and delivered voiceover.

This company history video also cleverly uses it’s logo branding, which is black and white, throughout the video. The animations themselves are also stripped-down and simple in style, reflecting the brand’s logo design.

This video is similar in filming style to the Burberry advert above. It feels very cinematic, and has high production value. The shots have been chosen very carefully, and is able to convey a long story in a short amount of time.

This video shows the struggle of an incoming immigrant to the U.S. Some careful thought went into the portrayal of class and race: being a German immigrant and being an African American at this time period were both difficult positions to be in. Budweiser also engages in a social commentary by emphasizing that one of their founders was an immigrant, as there is still a streak of anti-immigration in the United States. This helps sell the brand as a liberal drink for the open-minded American.

Finally, we have the Hong Kong and Shanghai Banking Corporation (SHBC). This video is also filmed in documentary style. It gives a nod to it’s Asian roots in the montage intro, but ultimately focuses on the U.K.

The host is a very relatable HSBC employee, that has been selected to represent the everyday person with in the company. Through Sandra finding out the World War II history of the company in-person, the magnitude of the events is heightened. (It’s much more interesting to see a person finding out and reacting to historical information, than it is to just be told about it.) Overall, it’s a very effective use of stock images and talking head footage.