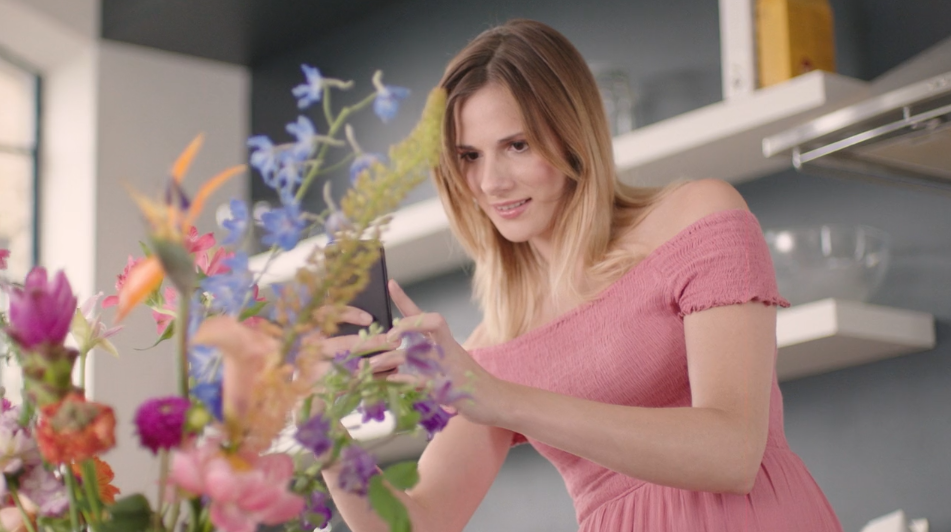 We were approached by the subscription flower company Bloomon to create an online video ad for an upcoming Facebook video campaign. The target audience was females aged 30 to 50 years old which is their target market. Bloomon knew that this audience could be targeted demographically via the Facebook advertising platform. Bloomon wanted an engaging video that would literally stop people’s thumbs from scrolling, grab them from the the very word ‘go’ and tell them that this was a video that was aimed towards them.

Bloomon offers flowers directly from the grower to the customer’s door, consequently their flowers stay fresher longer. Embracing a “less is more” philosophy they provide spacious designs which are designed to allow customers to provide their own personal touch.

We knew the appeal of flowers is in the beauty and so we wanted to create an ad that reflected that beauty, creating a video that had a cinematic quality to it. So from the very word ‘go’ we wanted to created something that was really visually stimulating.

The content needed to be thumb stopping so it required an arresting initial image. We designed the first image to be somebody looking directly at the viewer, almost breaking the fourth wall, whose gaze pierces out and really grabs your attention. 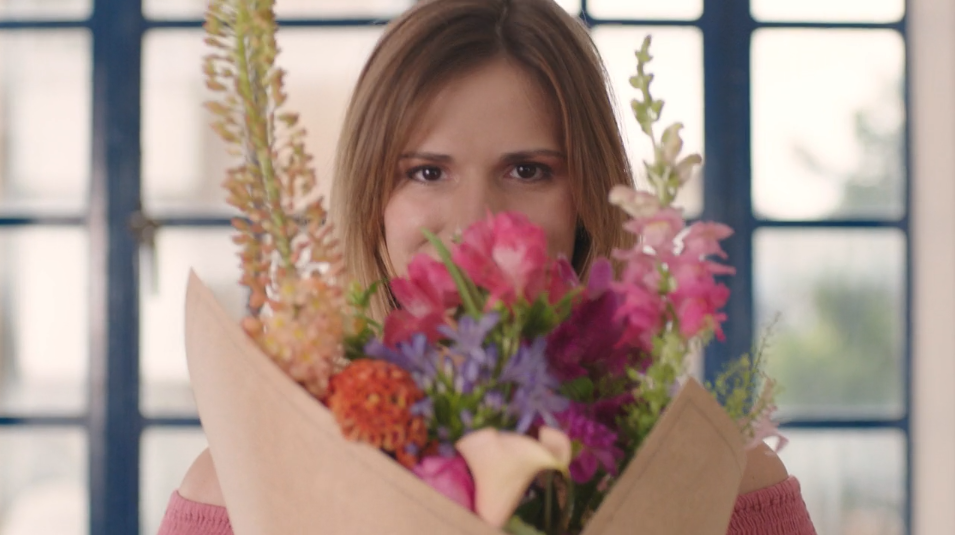 The video begins with a beautiful pair of eyes looking out from behind some beautiful flowers. We chose to make it a moving shot as well to increase engagement. When a shot is moving the audience feels like it’s constantly evolving like it’s going somewhere and that you need to keep watching to find out where the shot is going to go. To this end we designed a tracking shot.

It was always going to be difficult to execute because it required a very tricky focus pull, and we found on set it did take multiple takes to get it right. So it was a very ambitious first shot from the word ‘go’.

From there onwards we designed an ad that would use text on screen, and this was used as a means to communicate with the audience rather than using dialogue in the film. We felt that dialogue is difficult to get right in an authentic manner if you’re trying to sell something, so the way we did it was to really, really simplify all of the sale text, all of the copy, all of the concepts that they wanted to get across we tried to distill that into as few words as possible and we made just a very short script of on-screen text which would communicate the concepts that they really wanted to get across. 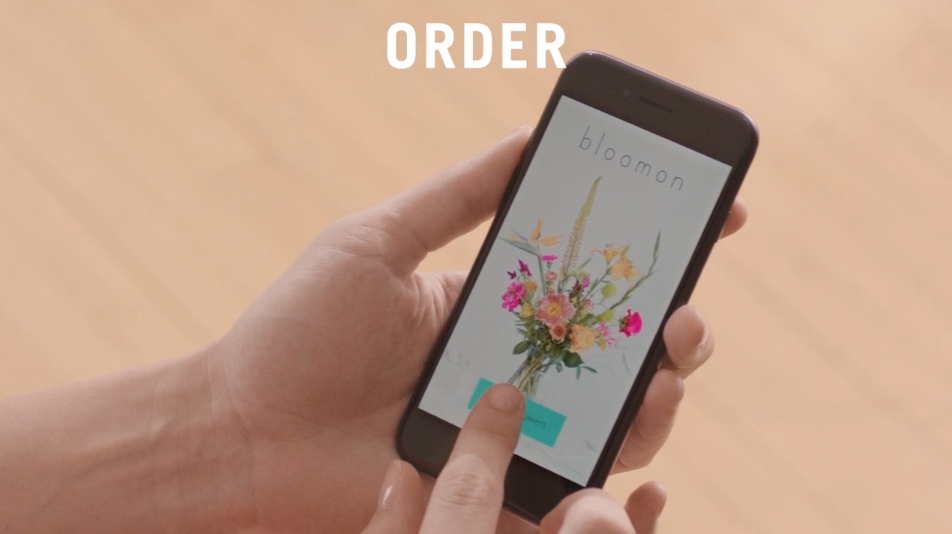 Consequently we ended the video with the flowers on the window sill and our actress stepping back and really appreciating the fact that her house had now been made into a home. It was something that was designed to really light up the environment and bring colour to that person’s life.

The video was designed as a journey from the front door to the final point where she’s appreciating these flowers. However, the tricky element came when we tried to do that in a linear narrative, because technically you would order the flowers on your phone or on your computer before they actually arrived.

The created a challenge because we had a situation where we needed to have a thumb-stopping image but also show the process we decided to break up the linear flow of the narrative and have the order process actually be shown after we did the initial thumb stopping image.

This was a bit of a risk. To make sure it would work and the client understood what we were aiming to do we created an animatic for the project. First we storyboarded the video then added into a timeline. We then experimented with several different music tracks before we finally settled on the one that we were using. With that soundtrack in place and with the shots on the timeline we knew that it was going to work and it was going to communicate the message to the audience.

You can see the animatic we created for the video below:

To enhance the cinematic quality of the image we used a haze machine. When you have haze in the air it kind of de-sharpens the image. Often HD images on digital cameras kind of look very sharp and very crisp. And one of the areas that we wanted to give a more cinematic feel was to decrease that sharpening effect and helped to make it a little bit more hazy. It gives an atmosphere to the room as well and it makes sure that any kind of shaft of light that comes shining in through windows or anything like that aren’t visible on the set and to the camera.

We shot on a Arri Alexa which is a cinema quality camera. And because we were really lean in the pre-production phase we were able to bring a real high production value to the ad, which the client wasn’t really expecting. But we were able to do it within budget and within schedule and they were super happy.

We also wanted to have an aesthetic which would appeal to an audience that is very familiar with the visual look of Instagram content. We did a few things like top down shots where we’re looking at flowers that are kind of in a stop motion way filling up a vase. And we wanted to show you the different range of flowers that you could receive by doing stop motion animation on set. To do this we changed the vase of flowers but kept the camera static. 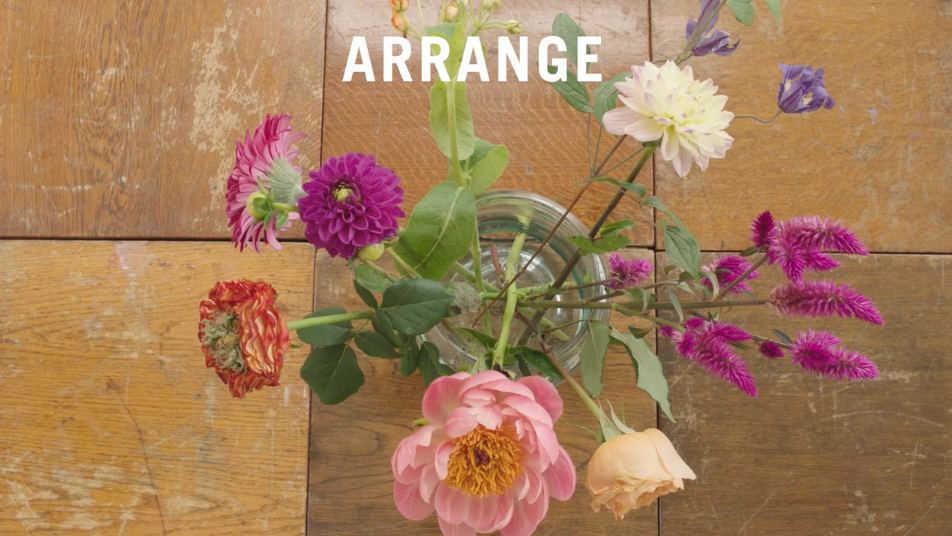 We used a track on dolly on set with a really nice dolly which gave us really beautiful smooth moving shots. Again, one of the things we wanted to do was keep the camera moving because it always keeps the audience engaged because they want to see what’s happening next where the shots are actually going. And again, it just gives a more cinematic feel.

Watch our behind the scenes video here:

One thing that was unique and interesting about this ad was that because it was for Facebook first, audiences created with a one by one crop factor, which means it’s a square image that we’re really creating this for, which works for Instagram and Facebook. This was a primary deciding factor about how we actually shot listed this in the first place and how we storyboard it.

We knew that we were going to create the ad also in 16 by 9, which is the more like YouTube and TV and cinema kind of style formats. But primarily we used a one by one crop factor. Now that presented us with some unique challenges because you can’t rely on having nice big wide shots which are generally considered to be quite cinematic, even to the point where when we shot this thing we thought we wanted to have a shot of a woman lounging in a chair, really admiring the flowers that were on the other side of the room, and we realized that with a one by one crop factor that just wouldn’t work. The flowers would have to be really close by her, that wouldn’t be a cinematic shot.

We thought as well that people would be watching this on a mobile meant that in that scenario both the woman and the flowers would be quite small in frame, and so it was a fascinating thought process for us to have to go through thinking about a mobile first audience and a Facebook and Instagram first audience as well.

So when we shot this thing we threw out all the wide shots, we focused on much bigger shots where you’d get much more detail, you’d really be able to see the flowers and the colour and the beauty. And that was something which was a really interesting learning curve for us, and we hope to do more of it. Also the thumb stopping nature of it was something that really worked as well, when we designed that first shot we heard really good feedback from the client who told us at the analytic showed that people are not dropping off, they are being engaged. That first image worked thumb stopper and people were continuing to watch.

Often with Facebook ads, you generally get drop off after one or two seconds when people realize it’s not quite for them. Whereas with this because it’s such high quality and because it’s visually engaging people really are watching the entire ad.

Video advertising in a soundless environment

Its well known that most Facebook videos are viewed with the sound off. The fact that we were not relying on sounds to tell the story was something that again influenced the shots that we were going to use. When we were trying to think about the process that you go through when you receive flowers, generally there’s a delivery at somebody’s door involved.

So we decided to use a simple music track all the way through the ad and use titles on screens to do the communicating to the audience about the different points that you go through when you make a Bloomon order.

That text became a particular kind of design style, so we used the client’s corporate font and we used it in a way that was with a particular colour that again we went through many colour iterations going backward and forward between us and the client. We found something that we were all happy with, but we got just the right colour, just the right size, again after trying many different variations.

In the end I think we got something that is minimal, but still very readable. It looks stylish and it ties in with the brand guidelines of our client, so the ad sits really, really well on their website, it ties in with

In the end we delivered two videos for the UK market and two for other Germanic language countries. For the UK versions we were assigned to create two versions with two different types of bouquets, and for the Germanic version of the video, again, we were supposed to create two versions, same thing, two different types of bouquets.

We used styling differently on each days, so we had a different stylist for each day. The UK stylist came in and was an expert on what high-end UK houses looked like. And we used a German stylist that we hired on day two, who brought a unique German look to the set.

You can watch the final video here: