How Brands Can use a Fresh Approach to Filming Interview Videos.

The talking head interview is the staple ingredient of modern corporate videos, but how can a brand liven up their content to elevate it and make it stand out from the crowd?

As a creative production company, we film hundreds of talking heads each year, but we’re always on the lookout for fresh creative approaches, so we can push the boundaries of the genre and help our clients create attention-grabbing videos, that say with the audience long after the first viewing.

Most brands who target a wide demographic face a conundrum when it comes to content creation. How do they appeal to a younger audience, without alienating their current core audience? In order to do that they need to find a style that is both modern but mature. It needs to grab the attention of a generation of young people who are bombarded with demands on their time. Whilst they have an internet connection there’s always something valuable they can be doing with their time. Across all social platforms there’s the chance to be educated, inspired, made to laugh, outraged or connect with friends across the globe. Why would they stay to watch your content? 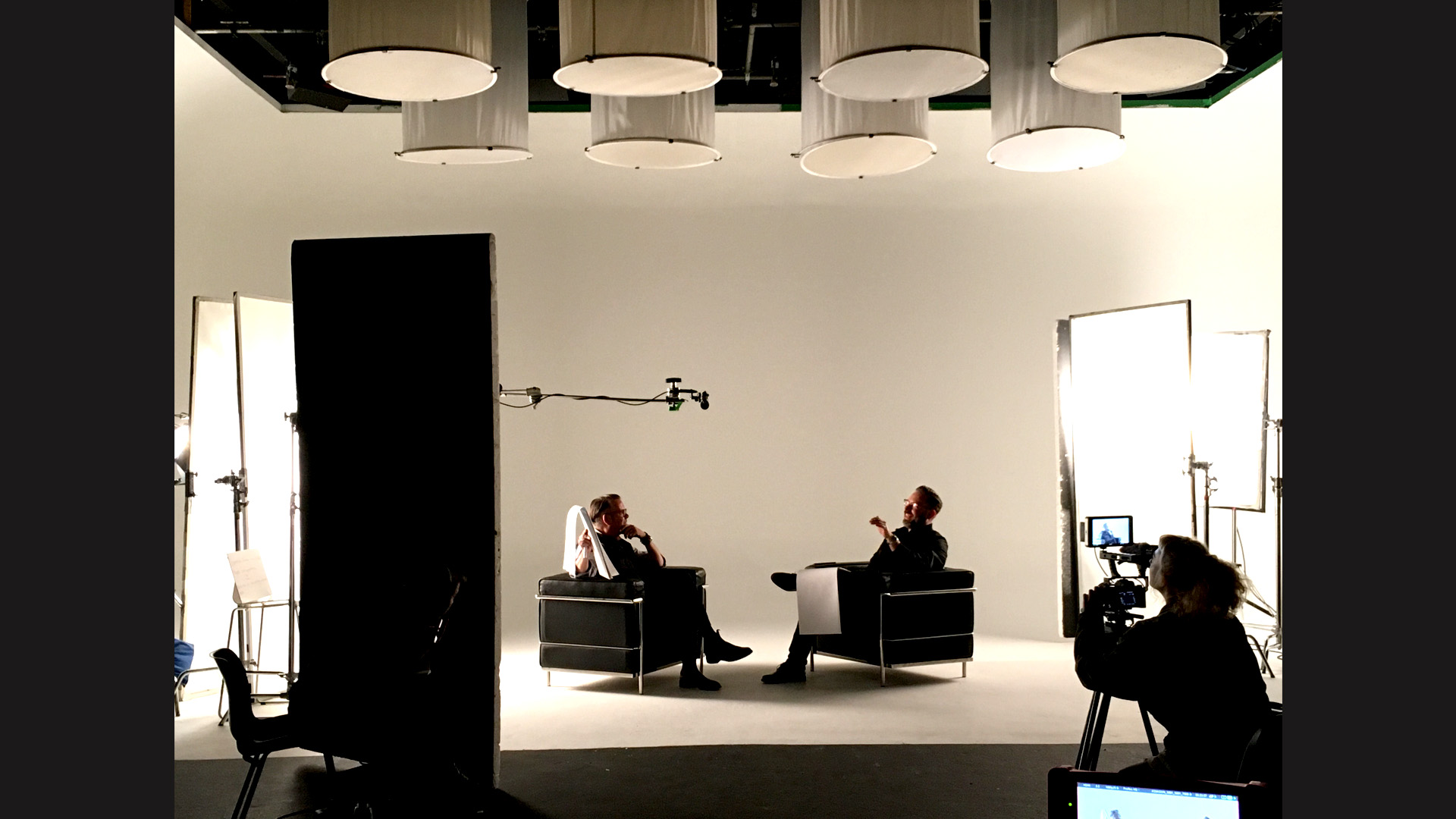 Well apart from making sure that your content is relevant, targeted to their needs and deeply informative, the filming style will also be key in addressing this challenge. But if you create fast-paced content for a generation of people who grew up on a diet of video games, how do you keep the attention of older viewers who can’t follow content that changes shot every other second?

I would like to highlight an example video which I believe achieves a good balance of inter-generational audience appeal. It comes from the Be Inspired YouTube channel and seems to be a modern way of grabbing the audience’s attention and delivering an inspiring message:

At the time of writing this article, it has over 3.5 million views. Let’s look at how they created an effective and impactful video, which appeals to a mass audience, and see if there are any techniques that we can adopt.

Firstly they used impactful thumbnails to stand out in social feeds. The Thumbnail for this video promises to teach the audience something valuable: ‘This is Why 1% Succeed.’ I don’t believe that phrase is mentioned within the video so a clever marketing copywriter has come up with that as an attention grabbing thumbnail title. The branding is also powerful. They use ALL CAPS in a contemporary yellow and white font. As you can see from the below thumbnails from the Be Inspired channel, they also use the same branding across all their videos.

The images show people with intense expressions and the headlines are all very ‘clickable’ with each one promising to deliver something extraordinary ‘Best Speech Ever’ and ‘Your Life Will Change Forever.’

Grabbing Attention (And Keeping It)

Secondly, the title is attention grabbing: It contains highly searched key phrases: Morning Routine and Facebook Depression. Clearly the person posting the video has done their SEO research to determine how people will find the video and what will make it pop up on the YouTube sidebar.

The use of music throughout the whole interview is quite unusual. Generally this style of interview will be silent (e.g. news interviews) but the use of music enhances the emotional impact of the speaker’s statements and gives gravitas to his comments. It also compels the viewer to keep watching as the music is constantly evolving.

There seem to be 4 cameras filming, which give varied camera angles. All of these angles come from three cameras and when cut together by an editor who understands film language, they act as a means to tell the story using editing as a form of grammar.

For example, you might start off on a wide shot to establish the situation – two people are sat in chairs talking to each other. Then you cut to head and shoulder shots as each person speaks. This feels natural as it emulates the normal field of view when talking to someone in conversation. You punch in to big close-ups for emphasis on important points and you use the ‘noddy shot’ (when the interviewee is speaking but we see the interviewer nodding) to punctuate paragraphs and give the viewer a chance to absorb the information they’ve just heard. The fourth camera provides the BTS (or Behind the Scenes) angle and is a modern way to give viewers another perspective.

A bts photo from our shoot with Hudson Fuggle.

It’s become more popular in recent years to show the camera crew filming. It acts as a punctuation point for a clever editor to be able to give the viewer a chance to pause and reflect. It breaks the fourth wall and adds an element of authenticity to the interview. As media savvy audiences, we all know how these interviews are put together and giving the viewer a glimpse behind the scenes breaks any artifice and lets the viewer in on the production. 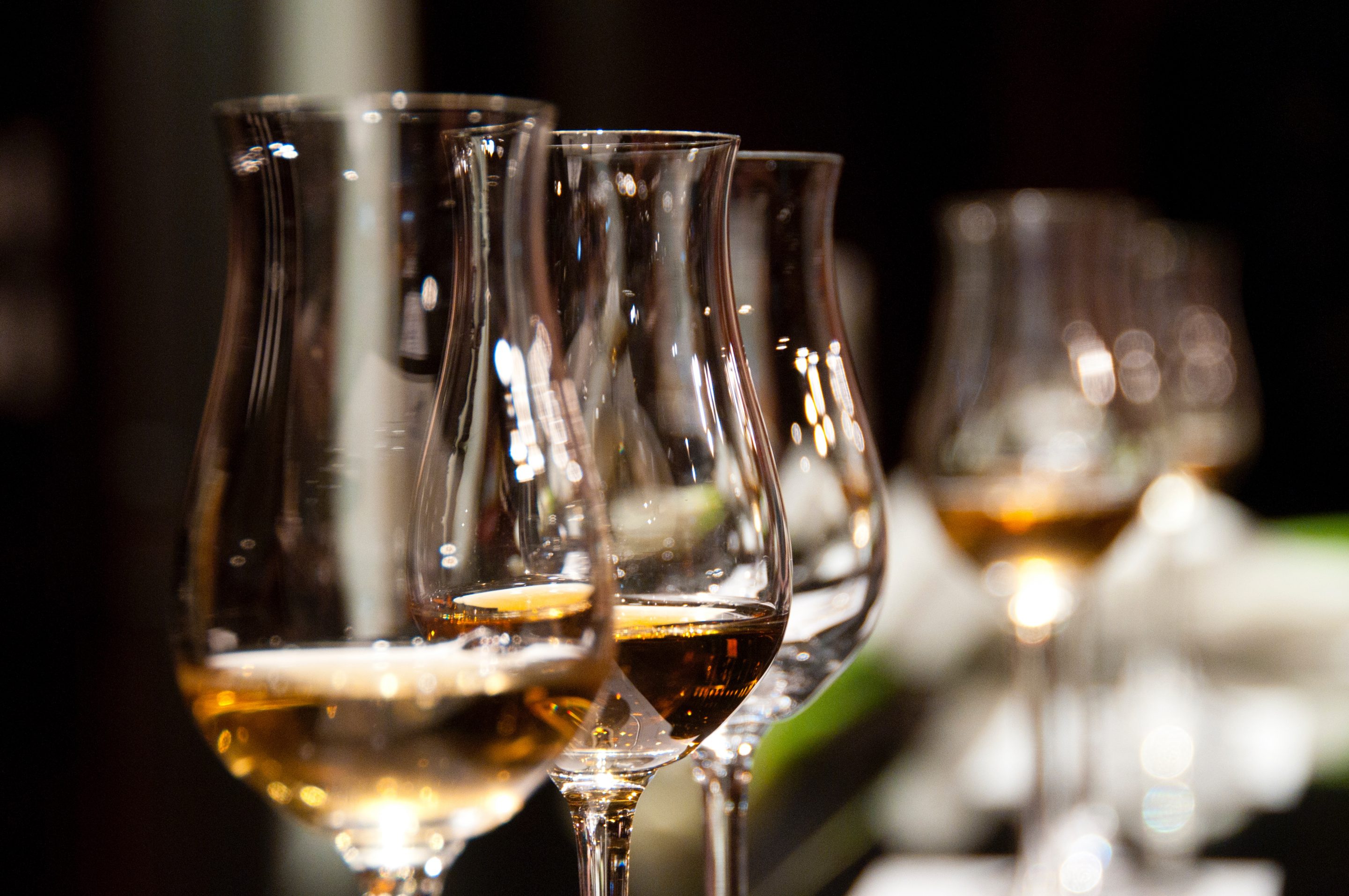 You can see in this shot that the front wine glass is in focus, whereas the wine glasses further away are not. This technique can be seen in the video. The interviewee is in focus and the background has been thrown out of focus. This gives a cinematic quality to the interview and sets it apart from the classical news style of interview, which favours a long depth of filed for ease of filming. 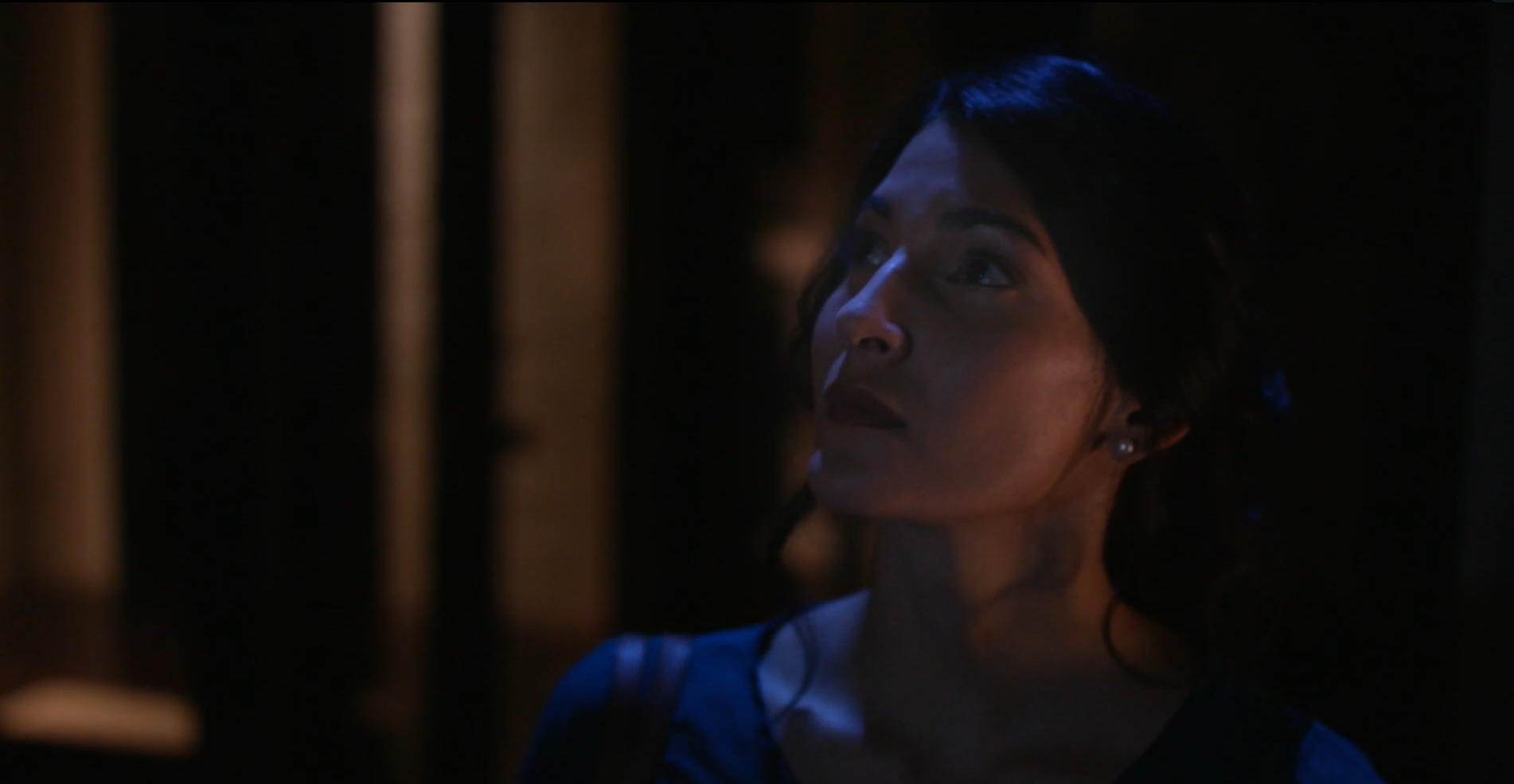 A still from our video for Emberlight.

The interview has been lit with simple soft lights, including one which has been placed on the floor to up-light the interviewee’s face. Again this is setting it apart from news room lighting which is usually harsh and unforgiving. The soft lighting gives a cinematic quality and makes the interviewee seem warm and friendly. Rather than an interrogation, this is a chat. 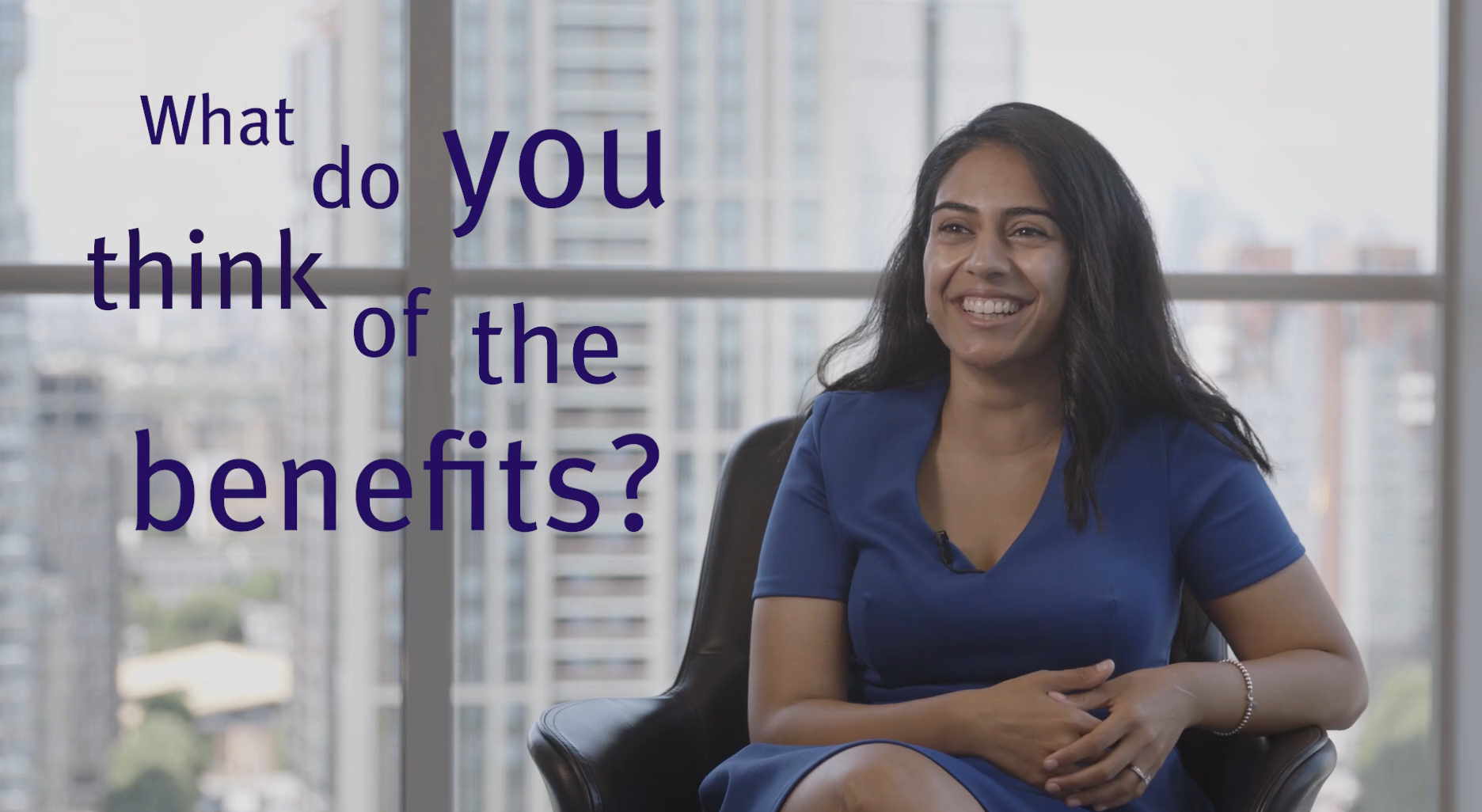 A still from our video for Financial Ombudsman Services.

One of the distinguishing factors that sets this video apart as appealing to a social media friendly audience, is the use of text on screen, which pops up unobtrusively and offers context to certain comments that each person makes.

One suggested improvement upon the example interview is to offer the interview content to audiences as small snippets of bite-sized information. The full video gives people a lot to digest and is appropriate for a YouTube audience where people tend to dwell longer, but for platforms like Facebook, Twitter and Instagram, where people are looking for short distractions, I feel that regularly distributed bite-sized chunks would be more likely to find an audience.

We know that grabbing an audience within the first ten seconds is essential and a snappy opening sequence is a potential way to do this. Using archive or stock footage edited in a fast-paced manner might be one way to grab attention.

One other way that brands could differentiate their interviews is by adding cutaways to images or videos that relate to what the interviewee is discussing.

This is a great example of how to film and edit a video for a modern social media audience. It is not ‘dumbing down’ the content or making it feel like it’s solely targeted at a young audience. It is both mature and visually appealing. The graphics feel modern and well designed. It takes the classic 60-minutes style of interview and evolves it for a social media savvy audience. This approach needn’t be costly or complex and it gives brands the ability to appeal to audiences young and old. The interview is promoted as inspirational and useful for audiences to watch. It’s clear that the time they invest in watching it will give them information they can use to improve their lives.

In short, there are lots of ways that brands can create interesting interview videos, using modern visual storytelling techniques, it just needs a spark of inspiration to try something new and creative and we will all be seeing better interview videos in our social feeds.