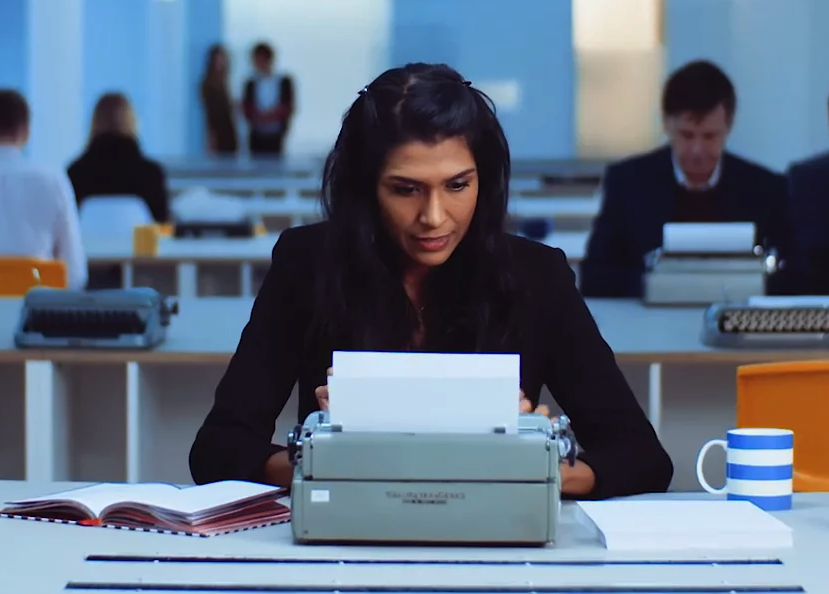 A brand video is the best way to help an audience relate to your company, by introducing them to your brand identity. We recently finished a video marketing campaign for business finance company Market Invoice, which you can see here. The campaign exemplifies how different types of video can be used at different stages of a sales funnel. Market Invoice was the UK’s first online marketplace that would allow companies to selectively sell outstanding invoices to raise working capital. A complex niche–and our job was to make this relatable.

As these brand videos are part of an overall marketing campaign, we will review how we designed these videos to fit with the client’s goals. We will discuss topics such as how to use this video strategy as part of your sales funnel, and how this strategy can draw traffic to your website. 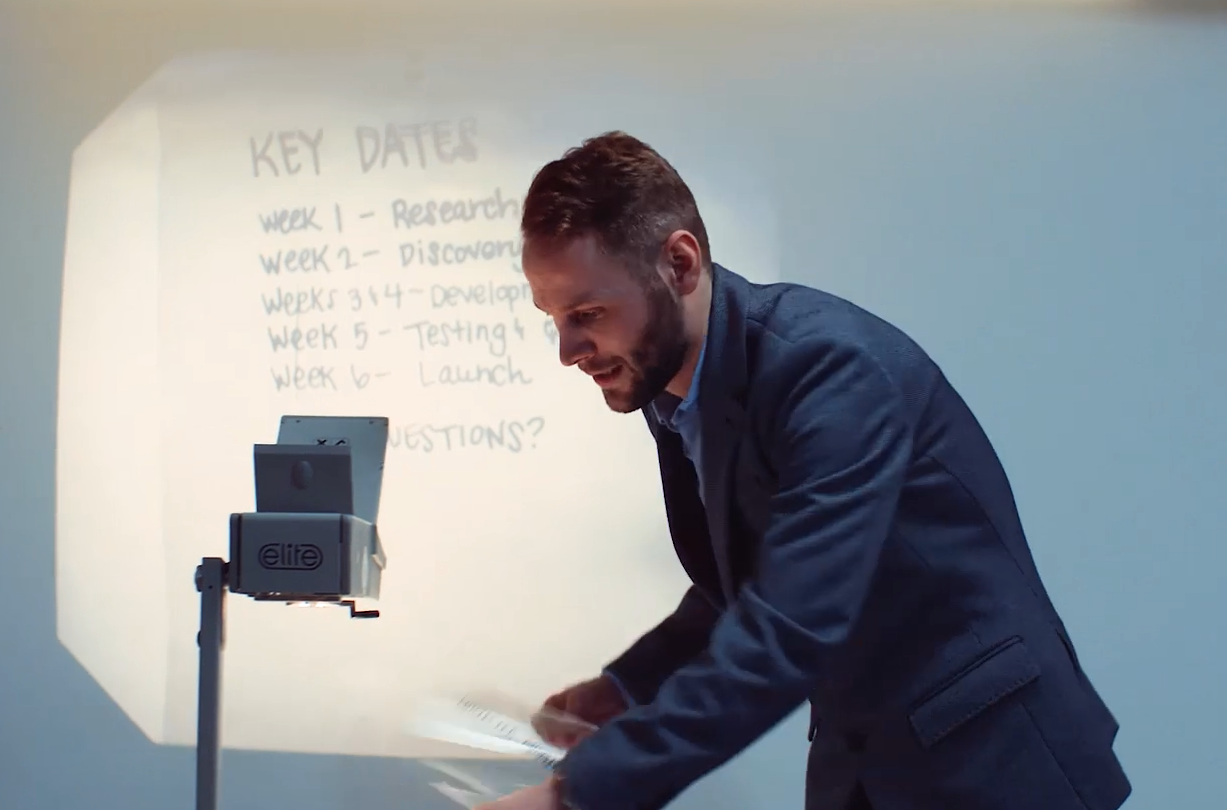 Market Invoice initially came to us last year and asked us to create a customer testimonial video for them.  We learned about the brand and it’s communication goals. We got to work on the testimonial video which featured Smith & Sinclair, a company producing sweets which contain alcohol. The shoot was a lot of fun, and we captured some great footage.  We edited it into a compelling sales tool for Market Invoice, which educates the viewer about the benefits of using invoice financing to grow a business.

The challenge in creating a compelling customer testimonial video comes in the balance between telling the customer’s story and highlighting how the brand helped them along that journey.  In this case, the customer had an intriguing story, and the product was produced in a visually exciting way, so there was a lot for us to film. Market Invoice had been instrumental in Smith & Sinclair’s growth so there was a natural balance. The video worked well both from an audience perspective (because it had a good narrative) and from the client’s perspective (because it showed them in a good light).

So Market Invoice were happy to listen when we suggested another phase of this campaign.

The initial idea for these brand videos was conceived by our producer, Alfie. He had this to say about this stage of pre-production:

‘We wanted to show the ease, swiftness, and overall simplicity that Market Invoice offers its business customers. As their service does not really have an obvious visual tie, we had to come up with an idea that had something visually impactful at the heart, but would not be completely removed from the space that their business and clients operate in.’

We proposed an initial idea to the client, and were pleased to find that they wanted to workshop it with us to make something that really hit their communication goals. Through much discussion between us and the client, something that kept coming up was that they are offering a new way of delivering a service in an industry that is otherwise dated. This got us thinking about the old and the new, and how if you dropped something old-fashioned, dated, and out-of-use into an otherwise modern world, it would rightfully look out of place.’

Our head of business development, Noam, also weighed in on the initial development and brainstorming:

‘Similar to what Alfie has said, while technological advances have penetrated  everyday business on so many levels, Business Finance solutions continue to lag behind. We wanted the viewers to feel frustrated and understand that this shouldn’t be the case. This is where Market Invoice comes in, and we wanted to strongly represent their updated offerings.

Knowing that Market Invoice has a very broad spectrum of clients, we then needed to think of a filming location where the juxtaposed ‘old’ would strikingly contrast against the new. Being that the office environment is universally known, and not really far removed from any business, we went with this as our setting. We then had fun thinking of outdated office tech that we could put in a slick modern office, to visually show that clinging on to the old does not make sense in the modern world.’ 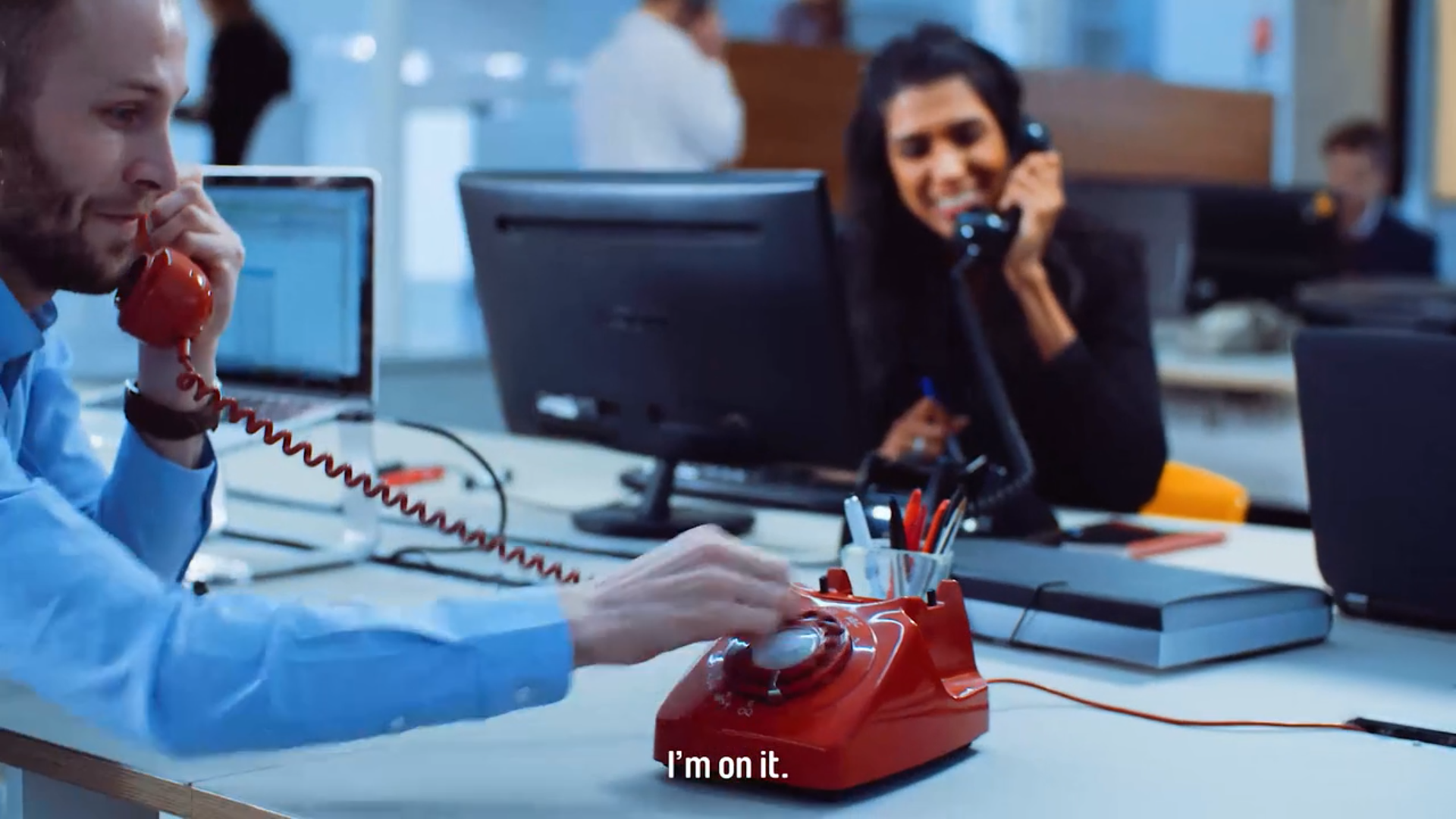 Using Outside Inspirations to Boost Creativity

Once we had a basic idea and a setting in mind, our next step of pre-production was to begin defining the style of the brand video. Alfie says his inspiration came from a film set in the 70’s:

‘I had recently watched ‘The Post’ with Meryl Streep and Tom Hanks starring. It is largely set in an early 70’s newspaper newsroom, so along with the 70’s wardrobe, there are loads of typewriters and rotary dial phones throughout. These office items are classic, now; vintage, pieces that everyone knows, but we just wouldn’t see in a 2018 office environment. They are visually really attractive pieces that have a distinct look and even a sound that works well on film. To contrast this with a clean-lined modern office, we hoped it would look great.’

Another thing we kept in mind while developing this concept was the culture we live in. We decided to use good old British humour to make the videos more appealing.

Alfie says, ‘I think British people like humour that is not signposted or put in bright lights as being a joke. The appeal of a subtle, wry British humour is that it is in the interpretation of what you see in front of you. It doesn’t patronise you and trusts that the audience will have the ability to understand the message and tone that is trying to come across.’

Economies of Scale: Creating 3 Pieces at Once

Somewhere in pre-production, it was also decided that we would film not one, but three separate videos for Market Invoice. These 3 pieces would offer the client a cost-effective way to build their brand and get the most for their money. Alfie says there were a number of other reasons they went with 3 vignettes:

‘One of the reasons was essentially economies of scale for our client: We needed one variant between each piece (a bit of old tech) that would distinguish each video from the others. We were able to accomplish filming in one day, at one location. Another reason is that having 3 vignettes means you have a series that is married together, and they all re-enforce one simple message.

If you see one of the videos and then at a later date stumble across another one, it will jog the viewer’s memory and start to build some brand recognition. Having said this, each video is capable of standing alone. The videos support each other, but do not rely on each other, which is incredibly important and fundamentally offers more value. Finally, having three videos allows the client to segment out how and where they push each of these videos. Allowing our client to do this split-testing is useful for them to know which video resonates most with their audience, and therefore know which one to push further.

We have given our client options that they can sample and test, which allows them to get a good feel for how they are received, and for us to know what has worked and what could be improved.

It is important for both us and our client to learn from the successes, so the next set of campaign videos can be even better.’ 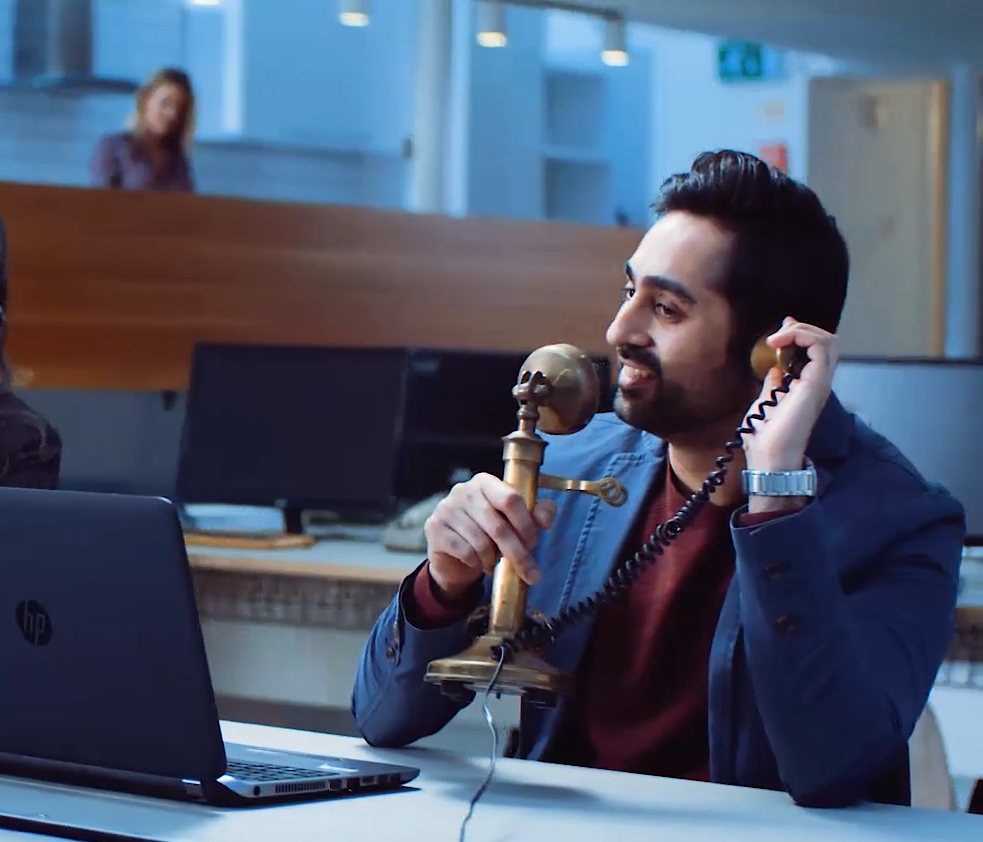 With each project that we complete, we have a tried-and-tested process that we use with each client. This process includes tailoring what we do to each client. We took each brand video and followed that same process. Alfie discusses further:

‘First and foremost, as you pitch any concept to a client you have to visualise the absolute final videos that you will be delivering to them. Once you have this picture, you then have to flip it in your head and ‘look behind the camera’. You have to think about all the crew, cast, kit, and planning that needs to be accomplished in order to deliver this video you have pitched to your client.

Thinking of all of these factors then becomes the basis for budgeting the production. Preparation is key: thinking of everything and everyone that needs to be involved is crucial. Before you can be set on the practicalities, it’s vital to have a long catch-up with the Director about how they visualise the end piece of content.

The reason for this is two-fold. Firstly, to make sure that you are both on the same page for what the vision is, and that that this page is the same as what the client is expecting. Secondly, this is because the Director will have requests for kit and crew that need to be factored into the production process and the budget.

Once this is all done, you can then go into building a production timeline for the client, which is a basic skeleton for dates and milestones in pre-production and post-production. You then create your own much more in-depth timeline for things to get done. This is essentially a ridiculously long checklist. You then get cracking and make sure you check, check again, and check again to lock everything in for the shoot.

It is important to bring the client along on the journey and involve them in some of the bigger decisions in pre-production, such as casting and location scouting. Fundamentally, they are the financiers of the video, and we want them to be happy with what we deliver. We don’t want them to be shocked or surprised by what we deliver them in post-production. Well, shock and surprise is not so bad, but only in a positive way, we hope!

Developing the Videos with the Sales Funnel in Mind

Now that you can see how we prepare the video, let’s explore the marketing side of of the project. We will start with discussion of the sales funnel strategy. As you all know, a sales funnel (or revenue funnel) refers to the process that a customer goes through when purchasing a product or service: 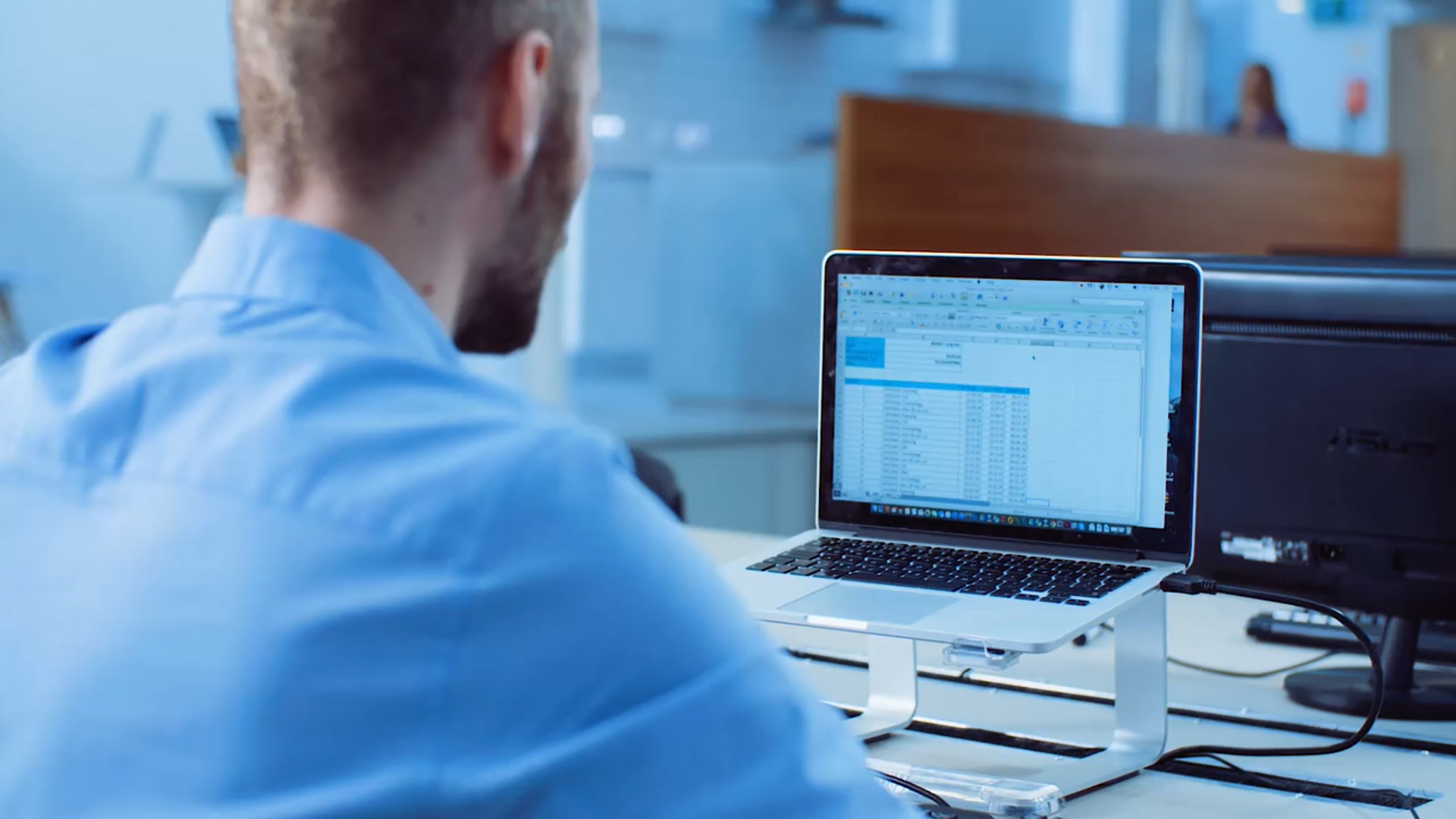 The video series that we proposed was always meant to sit at the top of the sales funnel: to grab people’s attention as they are busy doing something else.  Therefore, it was key to have a visually arresting image to begin the film. We tasked our Director, James, with this challenge, and he came up with the idea of doing each of the videos as a moving one-shot.  This means that the video would have no edits; however, it still had to be visually dynamic. We decided to keep the camera moving so the shot is constantly evolving, always revealing new details and capturing the viewer’s attention.

The colours in the piece were also essential to grabbing the viewer’s attention. By using strong lighting on-set, we were able to create an environment that could be manipulated in post-production to give arresting results. Once the viewer’s attention has been piqued, we wanted to make them smile. We know that the target demographic would appreciate seeing rotary dial phones and typewriters–they may be a distant memory, but they are not fully out of their frame of reference.

When you can ask Siri to dial a number in a matter of seconds, having to take several seconds just to dial one number seems bizarre. So the wry humour derived from the visual anachronism is something that we hoped will strike a chord and make people click through to learn more.

Once they do, they will be able to learn more about Market Invoice and the business solutions they offer. It’s here the potential consumer enters the evaluation phase, and may even look to our previous customer testimonial video to see how Market Invoice helped other businesses.

If the solution is right for their needs, the consumer will then make a purchasing decision, and our videos will have been integral in helping a casual browser become a paying customer.