How to Make a Creative Crowdfunding Video 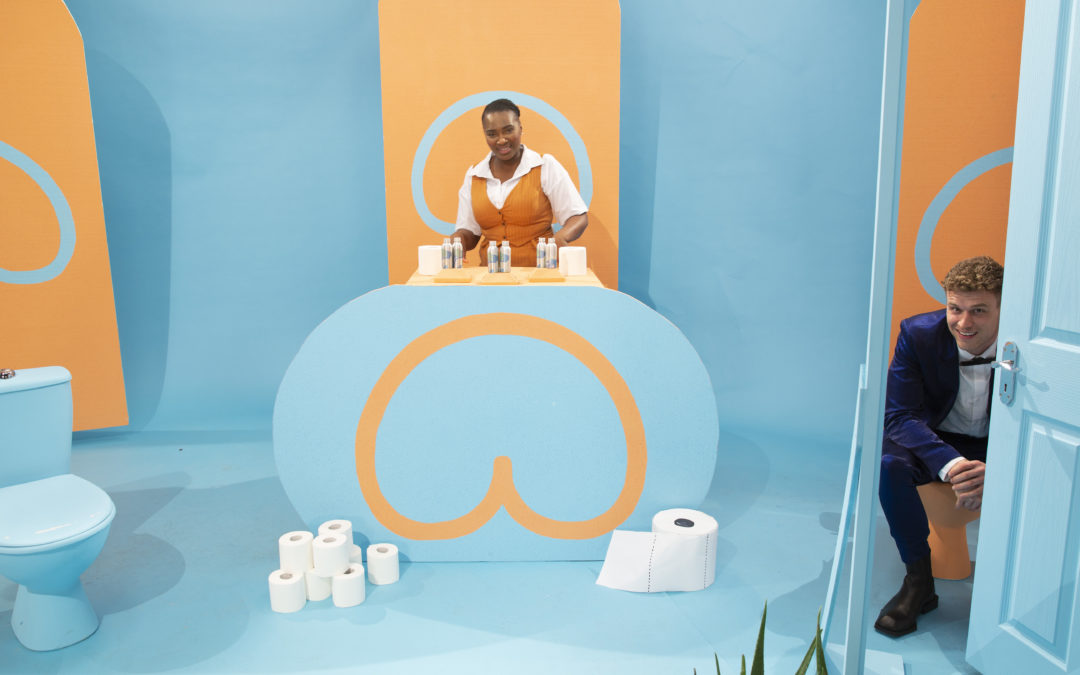 Wondering how to make a creative crowdfunding video? We share some insights on getting the most out of your campaign.

If you have a product or service that requires crowdfunding then you already know that the video is an essential part of the success of the campaign.  We recently helped the founders of Wype make a creative crowdfunding video which also communicated their business objectives.  Our Writer/Director Cameron Richards explains the process we went through which will hopefully offer some inspiration for how you can get creative to make your video stand out from the crowd.

How to Make a Creative Crowdfunding Video

I was very excited when Bold were first approached about making a promotional video for Wype – it’s always great working with a company that has a unique product and branding. Wype is a natural gel which can be applied to regular toilet tissue turning it into an effective, biodegradable and flushable toilet wipe alternative. Through their website and socials they’ve created a brilliant voice for their product, underlining the unique benefits of it in a playful way. There were so many possibilities of how to translate this into an on-screen promo.

The most important thing to do at this stage of development is to understand the client’s aim and intentions with the project. So we jumped on a call with Giorgia and Eli, the founders and discovered that they needed a promo for their new Kickstarter / Indegogo crowdfunding campaign, which would help fund a new design of the product which does away with single-use plastic. Already here you have quite a few things the video needs to introduce –

1. The Problem
2. The Product
3. The Brand
4. The Founders
5. The Crowdfunding Initiative

At Bold Content, one of our specialisms is in making the complex simple. We have a proprietary process which starts with us asking a set series of questions designed to give us all the information necessary to understand the client’s needs and how we can help by using video as part of their sales funnel.

Video has some unique traits which make it an incredibly powerful tool for marketers but a mistake that’s often made is trying to cram too much in when some details are best left for website copy. Our process helps us to identify which are the most salient points that need to be delivered, then working out how we can get the message to the audience in the most economical and entertaining way. For example, we often look at what can be communicated visually, rather than trying to cram every USP into a script.  We also look at the value exchange that takes place when a viewer clicks play on a video.  The brand wanted to communicate all the reasons why the viewer should make a purchase, and the viewer wants to know what’s in it for them and to be infotained. If we get the balance right, the viewers will leave the video glad that they spent 90 seconds of their life on a fun and educational experience.

The challenge here is to feed the viewer this information in a way that feels natural and is true to the brand. After absorbing the reference videos the client had sent, the Bold Content team sat down and brainstormed various approaches to the project. The bar was high, there have been a number of successful bathroom product promos that have gone viral, from ‘Girls Don’t Poop’ by Poopourri to Dollar Shave Club’s ‘Our Blades Are F***ing Great’.

Our main aim was to create a concept which would complement the look of the project, leaning into the slightly retro feel of their branding. I started looking at old game shows – ‘Blind Date’ with Cilla Black etc. I was struck by how unique the sets were, as well as Cilla’s relationship with the contestants and the audience. I looked at how contemporary director’s have harnessed this style for other promo’s, such as Bethan Seller’s work for Betfred and Adidas’s ‘Then & Now’ ad for Arsenal. This led to the first iteration of the idea – ‘Wype Date’.

Because we like to involve clients in the creative process and because it’s always good to give clients options, we also pitched two other ideas. One was an animated approach with butt shaped characters and the other was a high concept, ‘behind the scenes’ script which was quite meta and played with the Brechtian fourth wall. This idea leaned more into the comical nature of the product.

We pitched the three ideas to Gi & Eli, who considered each idea, but from their initial reaction, there was a clear winner in the game show concept. It leapt off the page and they quickly gave us the go ahead to develop the idea.

From our previous experience we knew how important a teaser video would be. Before releasing the full concept it’s important to whet the audience’s appetite with a promo telling them what’s coming. Then, when we drop the full video they’re primed and ready to click play.

At this stage it’s important to collaborate with the client to hone the script. Ultimately they understand their product better than anyone, so it’s vital to listen to their feedback. Although we were all excited about the ‘Wype Date’ idea, it proved too complicated a concept to fit into a short promo. After discussion with Gi & Eli, we decided to scale it back, focusing on the ‘problem/solution’ structure that most kickstarter promos follow. I returned to the R&D stage, keen to keep the tone/style we had agreed but needed a simpler framing device in order to sell the product. After falling deep into the YouTube rabbit hole I came across some old ‘Infomercials’, great remnants of the Teleshopping era. This offered a simple, sale-centric approach to the promo while still keeping that bold-retro feel that would compliment the product. I quickly worked up a new script based on this and sent it over to Gi & Eli, who were very happy with the new direction.

Time was short because the video was part of a wider marketing campaign organised with Indegogo so the whole Bold Content team leapt into action to bring the concept to life. 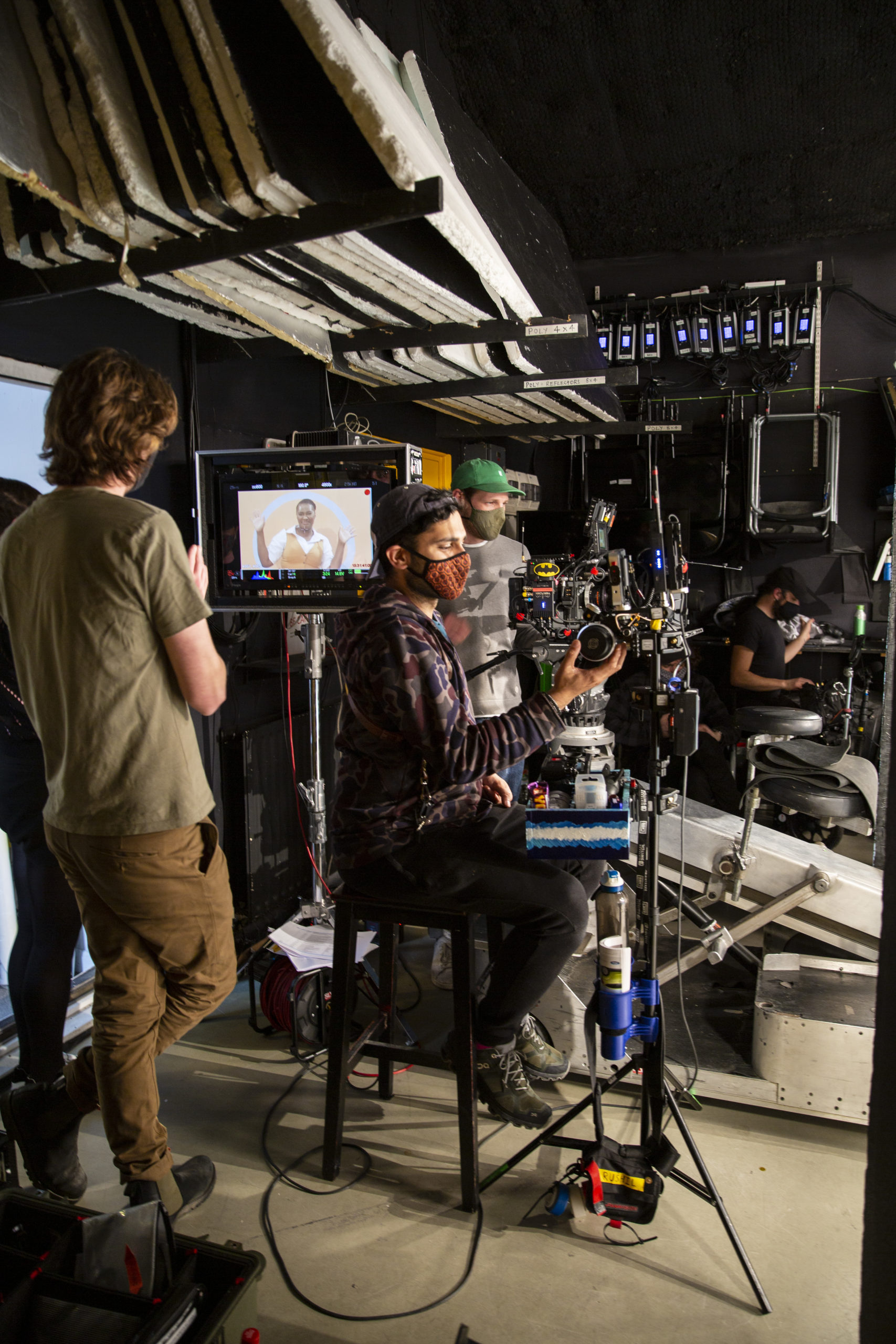 After locking the final draft of the script it was time to start assembling the crew and booking the studio. For a creative promo like this, you want to bring on people who are really engaged with the idea and will bring their own take on this. We were lucky enough to have Tom McCagherty, a fantastic Director of Photography and Annie Tinsley, an inspiring Production Designer come on board. They both ran with the concept, bringing their own ideas and specialisms into the mix. Tom came up with the best way to capture that ‘live-studio’ feel you get with infomercials, while Annie designed and built an incredible set, using the branding colours sent over by Wype. It was great turning up on the day of the shoot and seeing people’s faces as the set went up.

The shoot was intense, but incredibly fun and rewarding. The whole crew were fantastic, and it was great working with the actors to bring our Lead Presenter and Glamorous Assistant to life. Gi & Eli were also great collaborators on the day, offering ideas about how best to use the product on screen. We left the day very excited about what we’d captured and keen to get to the edit.

First we tackled the promo video, which was used to tease the longer video, that was turned around within two days to get it onto their social channels as quickly as possible.  Then we had a week to deliver the longer edit, including a colour grade to make the video look like an 80s infomercial.  This was all edited by our in-house editor Lindsey, who has a great ability to distil all the footage captured into a snappy edit. It’s helpful to have someone give new insight into the project, offering a fresh perspective on what is/isn’t working. We’d managed to capture everything from the script, so now it was about keeping it as short/succinct as possible without losing any of the beats we wanted to communicate. We had a lot fun adding in the infomercial graphics, as well as picking some groovy tracks to run underneath. The collaborative energy with Gi and Eli continued to be very strong, and we found ourselves with a final edit that satisfied us both. I was excited to see how the launch would go!

You can watch our Behind the Scenes Video here