London On A Bicycle 360 Degree Video 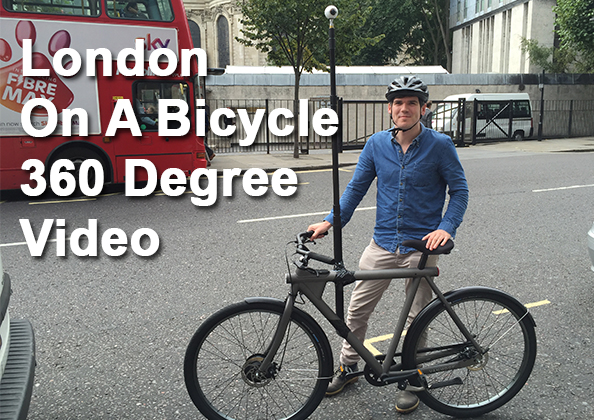 We recently filmed the London segment of a multi-country VR video on behalf of Google for Entrepreneurs & VanMoof Bicycle. Our part required us to capture a 360 degree video of the streets of London on a bicycle. Capturing a good quality 360 degree video from a bicycle brought it’s own challenges. Luckily the bicycle that VanMoof provided us was not only stylish, it was extremely stable as well.

How we filmed the London bicycle 360 degree tour

We used a boom pole that was mounted to the frame of the bicycle. Our Samsung 360 camera was then attached to the boom pole. We turned on the 360 degree camera and started to cycle. Our cameraman / cyclist aimed to keep the pace even and constant, with no sudden bursts of speed and avoiding potholes. The cyclist followed a route alongside the Thames and then across the bridge. That gave us enough footage to produce a thirty second 360 degree video.

You can see how we setup the 360 degree camera here: