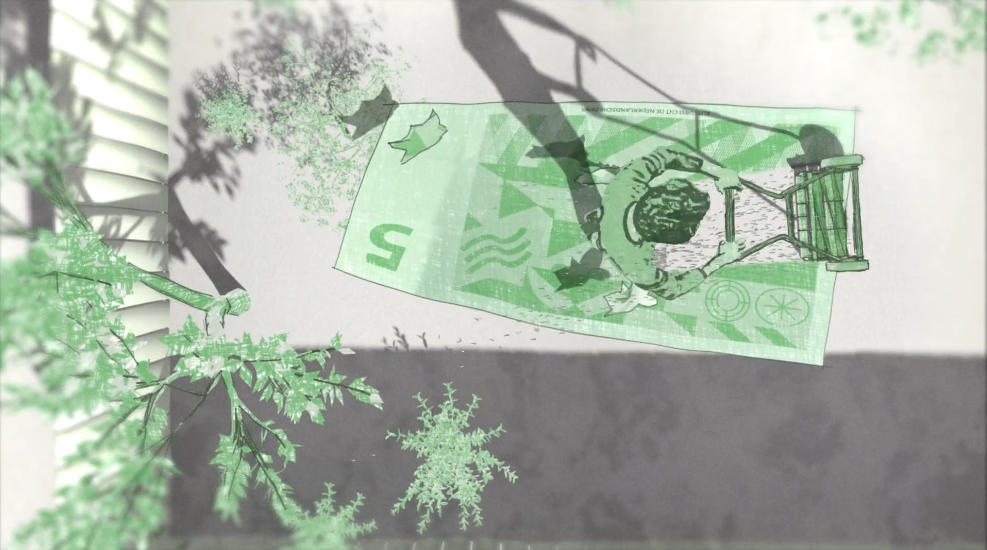 While it might seem counterintuitive to use animation in your documentary, there is some powerful merit that can come from this method. It makes sense to argue that using animation would be a big no-no—after all, the definition of a documentary is a ‘documentation of reality’, and using any form of computer-generated image is going to pull the viewer out of that reality.

One way to think about this is through the use of animation in explainer videos—this is often used to demonstrate an abstract concept that is difficult to explain through words alone. Truth is often stranger than fiction, so this lends itself to the argument of combining animation and documentary.

Here is a really excellent example of the use of creative cutaways to portray an indescribable experience:

You can see the animator has put a lot of thought into how to present these images. The goal is not just to portray the action of the first tower falling, it’s mainly about conveying the emotion involved. The use of scribbles—uneven, random, jumbled— to construct the forms of people and building represents the jarring, otherworldly experience that the interviewee went through.

The key is to identify the form of animation that will best represent the story you are telling. This animation is in black and white, which forces the viewer to concentrate on what is happening in the scene. Often, colour can be a distraction, and this simulation cuts through any glamour or comfort that colour might offer. The ‘flashback’ is portrayed as bleak and confused—the shapes meld into each other, coming out of the lines used to animate another. Towards the end of the sequence, when the interviewee is fleeing, the animation becomes ever-more distorted and less defined as people. The shapes come to resemble the cloud of dust that engulfs everything else around them.

The simple form of animation is effective at conveying a portion of the emotion that the interviewee went through. Using another form would have told a different story. Here are some further examples below:

This video, an entrepreneur documentary, uses animation in a bit of a different way, although it is just as effective.

The animator has chosen to use a more life-like representation here, with green tones: a colour symbolic of money. It drives home the fact that Lothar had to work a great deal to fund his sports hobbies. Eventually, this leads to the idea of his ski-clothing rental company. The combination of live-action and animated symbols helps convey the overwhelmed feeling that Lothar had to try to juggle school and work.

The animation is a way to separate past from present. It is much more playful than the above example: the shapes are well-defined and do not shift. They are used as a plot device to move the story along and keep the viewer interested: it helps show the audience the passage of time; Lothar growing up doing these chores.

Waltz with Bashir is a prominent film that comes to mind when speaking about documentaries that use animation as cutaways. It is a war film, making it one of the least-likely topics to use animation, but somehow it works and it accentuates the story. The animation style is dark and gritty. It allows the filmmaker to better place the viewer into the experience the soldiers had.

It also helps explore the obscure concept of a soldier dancing while shooting his weapon at enemy soldiers. It’s surreal to watch, which is what the other soldier felt when he witnessed this occurrence.

Using creative cutaways in documentary can add a new layer of depth to your film. It can fulfil many purposes, especially when it comes to portraying the past or a concept that is difficult to explain. It’s a great way of ‘setting the tone’ of your film and creating something that is truly unique to your documentary. Don’t be afraid to play around with different concept art, as well, to find the best type of animation to fulfil your vision.