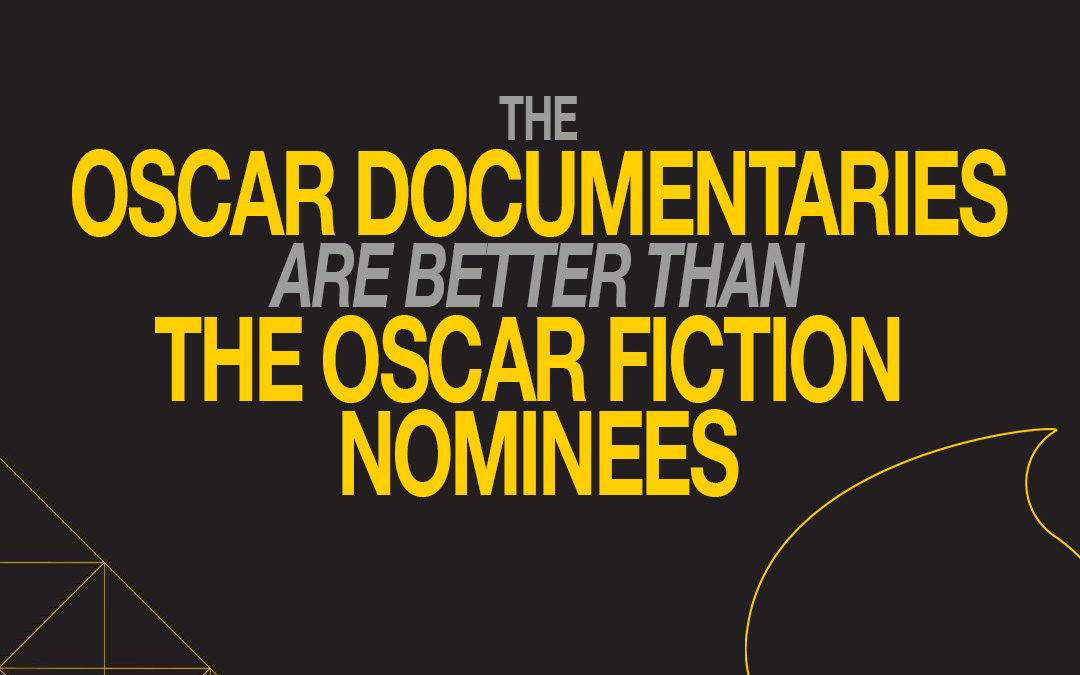 “The 2021 Oscar-nominated documentaries are better than the Oscar Fiction Films this year.”

In my humble opinion, if you’re looking for a good movie to sit and watch then look no further than this year’s Oscar-nominated documentaries.  They’re better than the nominated fiction films.

During lockdown my social calendar has been mothballed, so I’ve taken the opportunity to watch a fair few movies.  For the first time ever, I’ve managed to watch all the Oscar nominated documentaries and all the Oscar nominated fiction films before the awards ceremony takes place.  And I can say with some confidence that the documentaries are hands down better than the fiction films.

As a film geek I share a passion for fiction and documentary films.  As a filmmaker I favour documentary as a style of storytelling to connect viscerally with an audience. So there may be some bias inherent in my analysis.  But if films are a tool for sharing the human experience and communicating emotion, then I can say that I found myself way more moved by the documentary films than the fiction nominees.

Let’s take a look at the contenders.

Sound of Metal, Nomadland, Promising Young Woman, Minari, Judas and the black Messiah, The Father, Mank and The Trial of the Chicago 7

We’re living in a golden age of documentaries. Netflix shows like Nightstalker and Don’t F**k with Cats have injected creativity into the genre.  Films like American Animals have blurred the lines between fiction storytelling and reality. Audiences en masse are happily binge watching documentary shows and being entertained, gripped and moved to tears. The fact that it’s a true story makes the emotion all the more visceral. And that’s very apparent in this year’s list of Oscar nominated films.

A film that had me in floods of tears was Crip Camp.  A story that I initially found hard to watch but like most things in life, once you get over the barrier of it being difficult, the rewards are so much greater.  The story concerns a 70s summer camp for disabled youths and how that led to the disability rights movement.

It’s packed with compelling characters who face enormous barriers only to overcome them in an inspirational way. It has a positive, life affirming message that packs a real emotional punch.

From a technical point of view it’s a hell of an achievement.  For the editors to have waded through so much footage and to have weaved an intricate, character based story from mostly home video footage is an enormous achievement. Unfortunately there is no Oscar for best documentary editing and the best editing category is filled with the contenders for best picture, which seems a pretty unimaginative choice to me. Crip Camp is technically brilliant from an editing perspective but I also particularly appreciated the way that the interviewer (I’m assuming it was one or both of the Directors Nicole Newnham or James Lebrecht) managed to get such natural answers from their subjects. They are all clearly at ease in front of the camera, which is not an easy feat to achieve. They laugh openly, answer candidly and talk about some really personal subjects. So purely from a technical point of view it’s a work of genius but layer on the emotional storytelling and it makes the film an unmissable watch.

Collective is a documentary film from Romania exploring how a journalist fought to uncover corruption in the medical system. It’s a truly fascinating portrait into human nature and how political systems are open to corruption and abuse (a particularly pertinent subject for English viewers at the moment).  Again, this film is a hard watch. It starts with a nightclub fire in which 64 people died and more were horribly burned but the story unravels with one amazing twist after another. By the end we’ve gained an in-depth understanding of how this avoidable tragedy was allowed to happen, how politicians are corruptible, how humans can turn a blind eye to mass suffering if there’s profit to be made, how the right wing was able to distort facts for political gain by using the media to communicate a simple message to the greedy masses.  It’s a Romanian tale with universal relatability.  If it wasn’t true it would be hard to believe but like all great documentaries, the truth of the tale makes it all the more emotive. I found myself on the edge of my seat throughout the unravelling tale, which is more than can be said for any of the fiction nominees.

The Mole Agent is a heartwarming story of a man who goes undercover at an old persons home in Chile. From the start it’s set up as a detective thriller, but because this is not scripted narrative, the film takes a different path to the one the filmmakers were expecting.  As a filmmaker I can relate to how documentaries have a life of their own and really appreciated the skill of the filmmakers in pivoting their film in the edit, from an investigative, undercover documentary to a soulful study of the loneliness of getting old.

The Producer, Marcela Santibanez was clearly very adept at knowing how to tread the line between mendacity and investigative journalism and along with Director Maite Alberdi they have created an extraordinary film which weaves tenderness and sadness into a beautiful tale about the pain of the latter years of life.  Anyone who has experienced a loved one growing old will relate to the pathos in the exchanges between our main narrative agent and the residents of the old people’s home which he infiltrates.  The craft skills on display are in the patience needed to capture the full story of Sergio Chamy’s time at the old person’s home, then weaving those 300 hours of footage into a narrative that has romance, loss, intrigue and warmth, giving an intimate portrait of the late stages of life.

Sergio himself is the star of the show, a true gentleman with a heart of gold.  After having watched Collective, Sergio was able to restore a little of my faith in humanity. For me, I found more genuine emotion in the exchanges between Sergio and the amorous Berta, than in all the fiction nominees.

We often get asked the question, ‘how long should a video be?’ Well My Octopus Teacher shows that one talking head interview can hold the audience’s attention through a 90 minute film. Essentially the film is made up from an interview with Craig Foster plus Broll from his time in the ocean with his Octopus friend. From a filmmaking perspective it’s a fascinating documentary.  Foster is a brilliant storyteller and the editing is sharp and focussed, making the narrative move along at a compelling pace. The underwater photography is stunning and all the more incredible when you learn that Foster didn’t use scuba equipment but held his breath underwater. One of the most dramatic moments of the film is interrupted because of his need to take a breath. For me, this made the storytelling more real and more compelling.  This is something that for me was lacking in the fiction nominees. The film made me reflect on humanity’s relationship with nature, with our environment and our complete lack of understanding about the creatures we share the earth with.

Time offers an intimate portrait of a family torn apart by the American justice system. The hours of home video footage have been edited into a film which cuts to the heart of the American industrialised prison business. It’s insightful in a way that only a documentary can be, showing the raw unfiltered emotional impact of a family coping with an incarcerated father.

Sound of Metal, Nomadland, Promising Young Woman, Minari, Judas and the black Messiah, The Father, Mank and The Trial of the Chicago 7 are collectively downbeat films.  Don’t get me wrong, there are some great performances, some important films and excellent Direction on display here, but for me, none of them packed such an emotional punch as Crip Camp, none of them felt as immediately important as Collective, or as tender as The Mole Agent, or as reflective as My Octopus Teacher, or as insightful as Time. They seem to reflect an America at war with itself, shining a light on injustices and social rifts. Definitely important films but they left me numb compared with the experiences of watching the documentary candidates.

The Sound of Metal and Nomadland leaned heavily on a handheld documentary style of filmmaking, making them feel more raw and gritty.  In each of the films, events happened that didn’t advance the plot which is generally frowned upon from a Hollywood writing and editing perspective.  For some I know this lent an air of reality to the filmmaking artifice, for me, it made the films feel baggy and overly long.

The Father is an intriguing film with exceptional performances. It uses the medium of film in a clever and interesting way. It puts us in the shoes of a man with Alzheimers in a way that a documentary could not do. For me, it makes this film the outstanding candidate for Best Picture from the fiction list, but I get the impression that Nomadland will be an academy favourite because of it’s gloomy portrait of Americana. For me, Crip Camp or Collective would be picked for Best Picture. Both have a transformative impact on the viewer and that is worthy of a little gold statue.

There are just two more films that I would like to highlight whilst I have your attention.

Better Days is a phenomenal film from China dealing with the subject of school bullying. Such a creative and moving film definitely deserves to be in the list of Best Picture nominees, not just the best international feature category.

The Painter and the Theif was on the shortlist of films to be considered for a best documentary nomination. It didn’t get through but it’s an incredible watch. The access that the filmmakers get to the people appearing in the film creates an intimate portrait of two people with very different backgrounds and how their worlds collide. It was clearly a labour of love and deserves to be seen by a wide audience. For me, this film was more emotive and more powerful than any of the fiction nominees.

We’re very lucky to be living in an age where we have such amazing documentaries being made, partly due to the democratisation of the filmmaking process brought about by affordable broadcast quality cameras and editing tools. For me, I found that watching the oscar-nominated documentaries was an enriching experience in a way that the fiction films could not offer and I look forward to seeing what documentary stories 2021 will offer us.