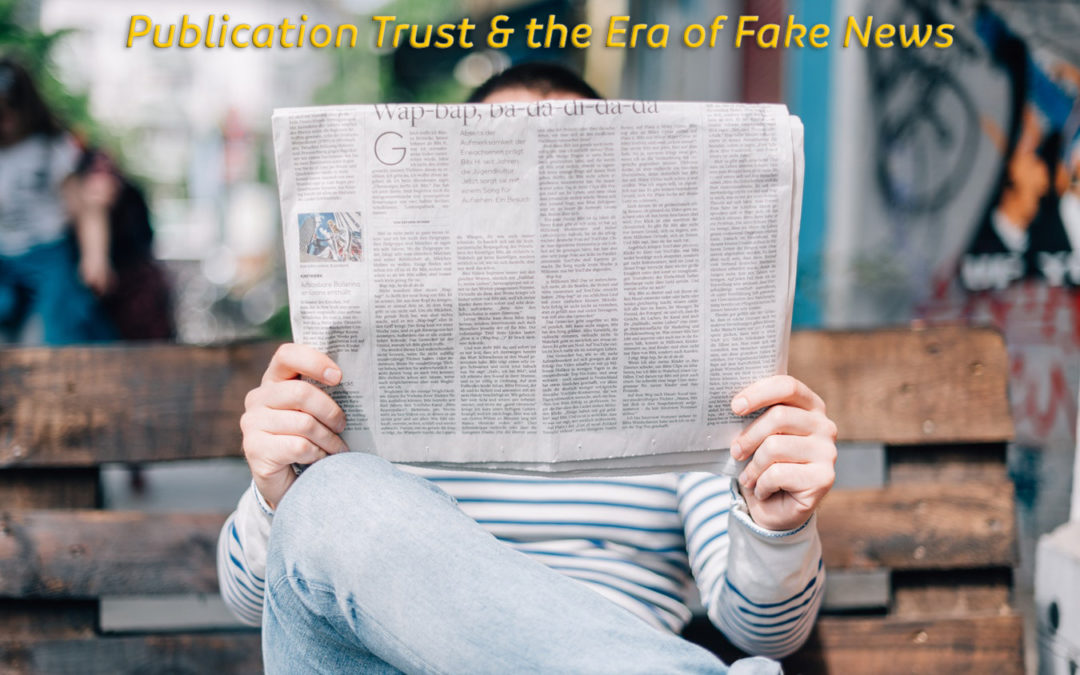 The Drum organised an event called Media Slap, where international media industry specialists gathered for an afternoon of presentations and panel discussions about crucial topics of the ever-changing media world. Here’s a look back on one discussion covering how to bring back trust to journalism and publications in the era of fake news.

This panel was hosted by Cameron Clarke, deputy editor of The Drum and the following: 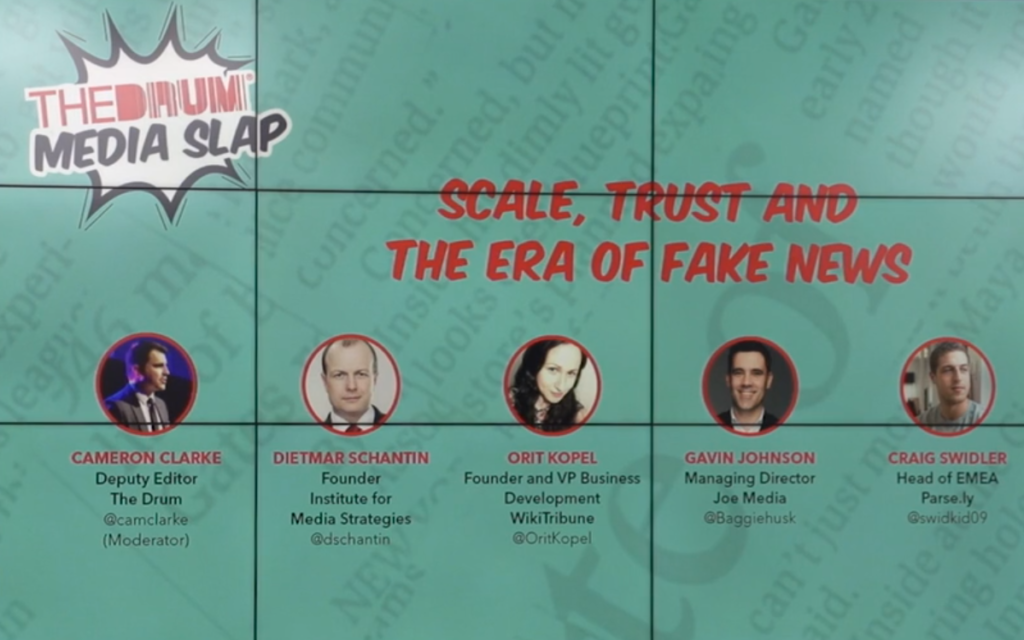 Christian Broughton opens the floor with fake news in relation to The Independent. The Independent has its own column dedicated solely to correct mistakes in publication, called “In Fact”. It was created to focus more on the cynical use of bad statistics, and how they can bring truth back into the mix. The inspiration to create the column was the political swing that was seen in Britain and the United States, with a not-so-subtle nod to the news reports during Brexit.

Broughton mentioned the human errors that may occur on fact checking and that the correction pages in newspapers have been around for many years, revealing how even some of the most basic tools behind editorial correctness are quickly discounted or forgotten in such a rapid news cycle.

Craig Swindler explained the viral appeal of fake news and whether “fiction is sexier than fact”. There is a spectrum of news sharing; one being content distributed with intent to mislead and fact-based journalism. Mistakes can be made on both sides. The bigger issue is the race to be the first to share the story, where a lot of the mistakes are made.

Orit Kopel, co-founder of WikiTribune, discusses their approach. WikiTribune doesn’t aim to get the news out first, thanks to its different business model. It follows the Wikipedia model, bringing together a community of volunteers and professional journalists to fact-check articles submitted by anyone.

Kopel argues this is a solution to the issue of fake news, as their revenue is not based on ads (and incentivising sensationalism). WikiTribune allows people to edit every article, preventing any bias which may arise when the voice of one prevails.

In contrast, this amount of freedom relies heavily on correct usage, with Kopel quickly rebutting that the same risk can be encountered when dealing with a more traditional editor and writer setup, as they can easily implement their own bias and opinions. 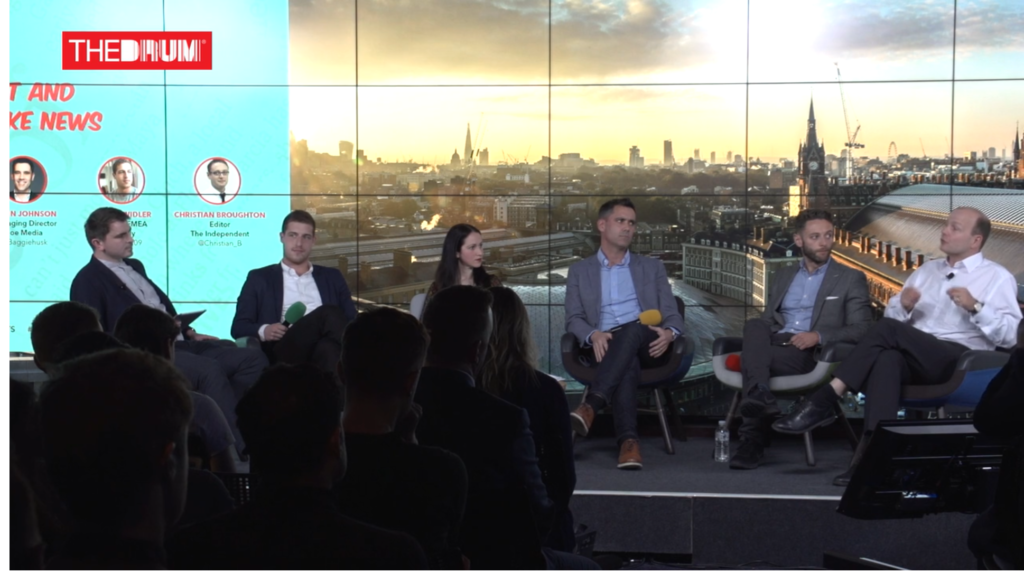 The line between advertiser content and editorial content has been stretched very thin. The two types of content were born with two very different intents, the first to sell a product, the latter to inform, but the line has become blurred.

Dietmar Schantin argues if an article is still useful and informative or entertaining, the platform on which it is published is still reliable. If the article is used purely to advertise a product, then the thin line between the two types of content is crossed.

Challenges of an Open Platform

Schantin then brings up the issue of WikiTribune’s everyone being able to edit, referring to a mistake a news outlet made by publishing something that was untrue from Wikipedia. He then affirms that the model should be quality over quantity to entice readers to come back.

Christian Broughton agrees with these points, discussing how search is becoming the audience acquisition model yet again. However, he recommends to have a balance between sources of revenue. He also mentions that the Independent has a monthly online subscription service, which has more subscribers than the paper did, indicating traditional means of supporting journalism are still alive and well.

Orit explains how professional journalists review everything on WikiTribune before it’s published. There is a vetting process for articles, with editors checking before the publishing. Unlike Wikipedia, there will need to be prior approval, resulting in the combined effort of both the community and seasoned professionals to make sure that only reliable and evidence-based news pass through. 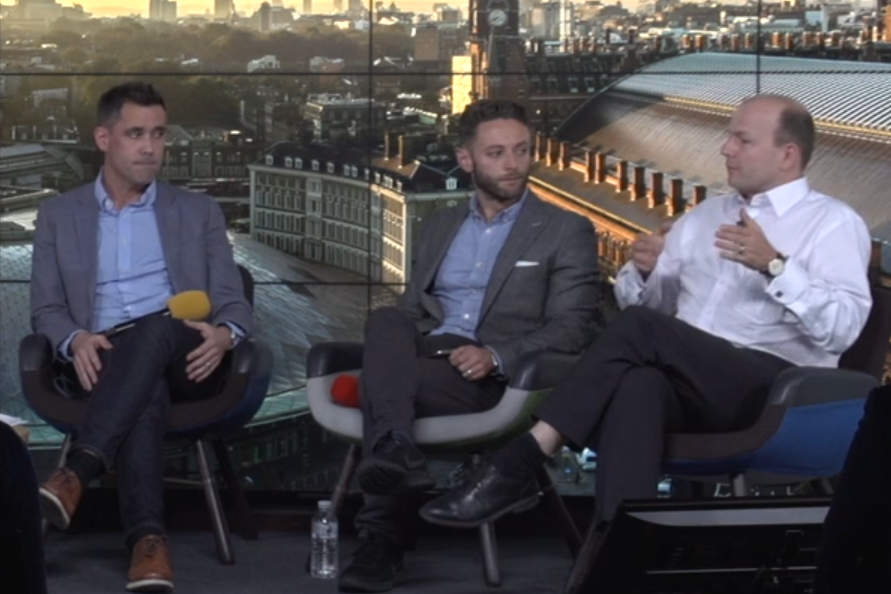 The conversation turns to trust indicators – this new tool will provide information about the publishers and journalists to aid in differentiating fake news outlets from reliable news sources. The online community can disprove fake information very quickly by doing their own research, and the question is raised of whether it’s the publisher’s responsibility if they distribute false information from wanting to be the first to break a story.

Closing comments discuss why journalists themselves have trouble distinguishing fact from fiction. Schantin again mentions quality over quantity. He refers to the pressure for producing more, forcing even properly-trained journalist to be lazy during their fact-checking, leaving the audience with one main and important message:

Like anything done well in life, journalism requires time to be done properly, and we can only hope that more news outlets will go back to this way of functioning and working.