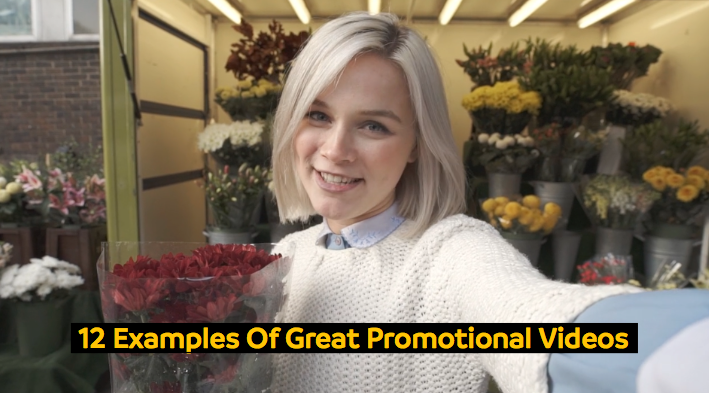 Promotional videos are some of the most creative, humorous, emotional, (and yes, artistic!) pieces of visual storytelling out there today. A video that goes viral can grant global exposure for a cause, brand, or product. Here are some great examples of promotional advertisements done right to feast your eyes upon!

Starting off our list, we have an advertisement for Marks & Spencer (a major London based department store), promoting their luxury food products.

Visually, it really pops, thanks to the contrast between the colorful food and non-distracting backgrounds. The geometric shapes were also consistent, notice the dominance of circles, circular objects and the smooth match cuts between them.

Plus, it just makes me hungry.

Local digital currency platform Colu has a fantastic product. It wants to use the same blockchain technology that powers digital currencies like Bitcoin to help local economies flourish.

Unfortunately, when you start throwing out phrases like ‘distributed ledgers’ and ‘open-source’, it’s easy for people to get confused.

To solve that problem, we created a promotional video for Colu that tells a simple story. It’s a narrative piece about one woman who engages with her local community using the Colu App. The video mixes user-generated content with traditional documentary-style filmmaking to lend authenticity. You can read more about the Colu video here.

Next on our list, we have Starbucks with their new years video, “A Year of Good”, where all the positivity, charitable acts, and kindness from customers and employees alike are celebrated.

Starbucks really tries to identify and connect with their customers, and this comes through by using organic social media-style video clips and images. Customers feel like they contributed when they watch this.

This promotional video from GEICO advocates how happy you’ll be when you save money by switching your insurance provider.

Full of entertainment with a little GEICO nod at the end. Genius.

Colin Kaepernick’s commercial for Nike stands out to us as a powerful promotional video that encourages everyone to push the boundaries and achieve something great.

A variety of angles, playback speed, and editing, together with the rousing music and eye-contact, makes this commercial a real celebration of sportsmanship and achieving the impossible.

City Bicycle Company are the folks behind this dreamy and stylized advertisement for their high-end fixed gear urban bicycles (I kinda want one now).

The use of flares, speed shifting and shallow depth of field add to the minimalist and romantic appeal of urban biking. Shooting the video at golden hour doesn’t hurt either and makes everything look gorgeous.

Samsung shows off its virtual reality tech with a 360-degree ride along with Santa.

Many 360 VR videos tend to be visually appealing but lack a narrative. This video had texture, depth, and a simple story to make it more immersive. Plus, it’s incredibly festive, and who doesn’t love Christmas?

Here we have Google’s staccato ad for their Virtual Assistant, that was released to the public earlier this month.

The simple one-shot, zoom-out method for each vignette is effective and visually pleasing. It’s simplicity and a funky track help make it fun to watch.

Apple shows off their recent addition of virtual stickers to the iPhone 7 with this quirky promo.

Stickers were used in place of dialog to communicate between characters. The theme was very cleverly conveyed: “say it with stickers.”

Hostelworld hooks up (see what I did there?) with Charlie Sheen in this tongue-in-cheek video.

Humor and persuasion are used effectively here as the creators take our expectations and turn the tables on us, which makes the piece memorable. Hostels (and Mr. Sheen) don’t have to be uncivilized!

Virgin Holidays uses a collage of “live” footage from around the world to get viewers excited to travel the world with them.

Virgin has a strong call-to-action and adventure here, ‘seize the holiday’. With the popularity of live-video-streaming on Youtube and Facebook, a person watching others ‘seizing their holiday’ may very well think, “Yeah, I can totally do that, it’s no big deal.”

M.C. Hammer demands an end to hammer time, and shows off what’s capable with Command strips for hanging pictures without turning your walls into Swiss cheese.

Again, we see humor and persuasion used effectively. The audience is shown how easy it is to use the product. No big deal!

The business communication app Slack gets exposure with this quirky and enjoyable piece.

The video feels like an episode of a comedy series about a semi-dysfunctional video production company. Demonstrations of the app in action help convey how useful it is.

There you have it! Some great examples of promotional videos pulled off really well, in a variety of ways, and with incredible creative flare. Hopefully, this list inspires you for your next video project!