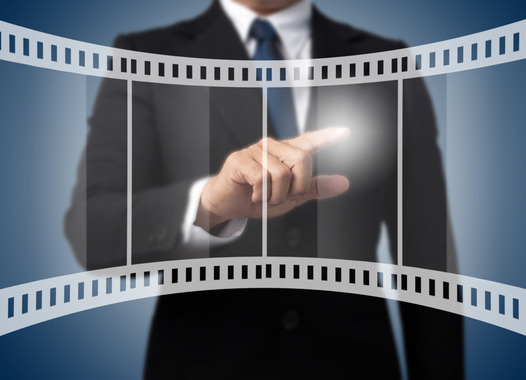 Prior to widespread usage of online video, corporate video was primarily used either for internal communications or for broadcast on television. Budget constraints tended to limit the amount of corporate video which could be created. However, the falling cost in HD cameras has meant that even regular corporate communications can be filmed to near broadcast quality. Combined with the falling costs of equipment, the ability to host and distribute video content online has also contributed to the sharp growth in the amount of corporate video produced. In a 2015 study it was shown that 96% of all B2B organizations now use video. The reason for the widespread use of corporate video for communications goes beyond just falling costs. Having video on a website can significantly improve both the amount and quality of traffic to a website. Video can also help to build engagement with an audience as people spend more time on the websites that feature video. Finally, video can convey a large amount of information in a relatively short space of time making it perfect for explaining complex projects or products.

As noted above corporate video is an umbrella term which covers a number of different types of video formats each used for their own specific purposes. Below are some of the main types of corporate videos that are created.

Promotional videos are used to highlight a specific corporate initiative, product or service. An example of this is City of London based office and retail estate Broadgate. Broadgate recently launched a new dining hub called Broadgate Circle.  To promote the launch night for Broadgate Circle had Bold Content create a video which on their website and be used as part of their marketing campaign.

Training videos are used for everything from on-boarding new hires, to health & safety training to upskilling employees. Training videos have become an extremely popular way of training staff to often lower costs compared to in person training. One of the advantages of training videos is that they can be filmed once but displayed to multiple different audiences.

A relatively new area of corporate video is corporate social responsibility (CSR). Corporations have becoming increasingly involved in social initiatives which have a positive impact to society. A good example of a CSR video is this one created for Coca-Cola on behalf of their recycling initiative. CSR Videos may be used to communicate to both external and internal audiences.

The process by which corporate videos are made will differ on a number of factors. These include the nature of the project, whether they video is being produced by an internal team or external agency and what type of video is being made. Below is a brief overview of the process when a corporate client chooses to work with an external video production agency.

If you want to learn more about the process, please take a look at this more detailed article on the corporate video production process.

The video production process will usually begin with the corporate client making an initial inquiry. During this initial inquiry they will determine whether the video production agency is a good fit for their requirements. They will explain the project to the video project company including what the objective of the video is, which audience they want to reach and how they want to communicate the message. From that point the agency will provide them with either a firm quote or an estimate of how much it would cost to complete the video brief.

Stage 2 – Developing The Concept For The Video

Once the concept has agreed upon the video production company will design storyboards. These are a pictorial representation of what each of the shots for the video will look like. Storyboarding allows provides a guideline for the video production company once filming begins. Storyboards will not always be necessary. In the case of talking head style interviews or filming a corporate event it may not be necessary storyboard before production begins. Read this article to learn more about how to use storyboards to create a successful corporate video.

Once the concept for the corporate video has been agreed and storyboards have been made the planning for the production can begin. This includes scheduling, organizing shoot logistics, hiring special equipment and auditioning actors. Timelines are extremely important because there needs to be sufficient time for the client to feed back prior to any promotional deadlines for the video.

Next the pre-production research phase will begin. This will typically include a recce of the filming location. This recce will be used to identify any issues that might interfere with the shoot such as ambient noise, glare, or foot traffic. The person performing the recce will identify the best location for shooting which will avoid having the film disturbed.

Before the cameras start rolling the video production crew will usually prep the person who is going to appear on camera. This will include advice on how to deliver the content which will be needed for the final edit. The crew will also need time to set-up including making sure that all safety procedures are being followed. Filming will begin with a clapper board which is used to sync sound. When the director is happy that they have everything that they need they will call cut.

The raw footage will be taken then back to the offices of the video production company. The footage is then moved from the camera cards to video drives. Usually backups will also be made in order to ensure that the footage is safe. Editors will cut the footage to create a first assembly. The corporate client can then provide feedback about what they want to see included in the video. There will then be a second draft made of the video. During this stage the video will be rendered in to full master quality. If the client is satisfied they will sign off on the final version and the project will be complete.

Corporate videos are a rapidly evolving area of corporate communication. New video technology and online platforms are providing innovative new ways for corporates to communicate with both internal and external audiences. In the past year social media sites like Facebook and Twitter have seen massive growth in video consumption. New technologies like 360 video and virtual reality promise a world of even deeper levels of engagement. These changes create new opportunities for corporates to better communicate their message to their intended audiences.